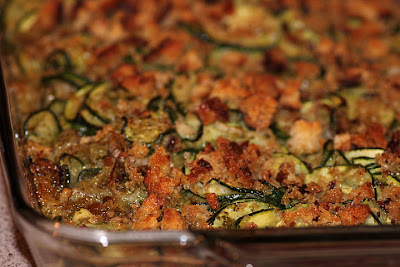 Inviting Kirsten to join us for our BATF early Thanksgiving was one of the best decisions we ever made. We always love her company and her food contributions were spectacular! After she treated us to her fig thyme cocktail, Kirsten made two, non-traditional, side dishes that took our Thanksgiving to the next level!

I love Thanksgiving. I look forward to seeing family, the fall leaves and pumpkins, and even the football games…as far as the food, not so much. This may seem shocking. After all, for many people Thanksgiving is all about the turkey, gravy and stuffing. However, as the lone vegetarian at Thanksgiving meals I usually wind up with some mashed potatoes, cranberry sauce and maybe some green bean casserole. Not terrible, but nothing that great.

But now my opinion about the Thanksgiving meal is changing, thanks to BATF and a recent cooking class. I admit I was a little intimidated when I was invited to the BATF Thanksgiving-themed retreat and had to bring something to contribute. After all, these girls are obviously great cooks. And I totally understand that sometimes vegetarian dishes get a bad rap. My brother, for instance, would be horrified to eat anything labeled vegetarian or any type of “mock meat.” I know he’s not the only one—anyone else see the Parks and Recreation episode where Ron Swanson was asked if he wanted salad and he replied, “Well, since I’m not a rabbit, no, I do not.” Yep. That kind of sums up some people’s perceptions of vegetarian food—not fit for humans— so I wanted to be sure to bring something besides Tofurkey and sprouts.

Luckily, before going to the retreat I attended a great cooking class at The Pantry at Delancey with some delicious veggie recipes that I thought would work really well as Thanksgiving side dishes. I think the trick with these is that while they use vegetables and lots of fresh herbs they also taste like comfort food. I mean, there are definitely really good and healthy vegetarian recipes out there, but this is Thanksgiving. The recipes don’t quite enter into Paula Deen’s realm , but let’s just say they don’t skimp on the dairy.

The two dishes I made were a Zucchini Gratin with Salsa Verde and a Slow Roasted Tomato Tart (recipe coming soon!). Before making the zucchini gratin, I bought a mandoline slicer. This is a great tool and was a much easier way to cut the thin slices of zucchini. (Even though Megan had to intervene and take over for me because I was afraid of cutting my fingers off.) 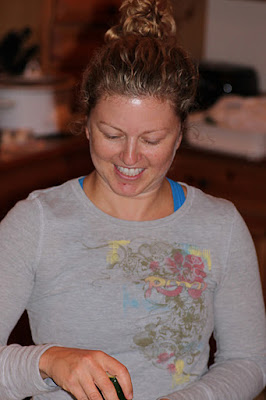 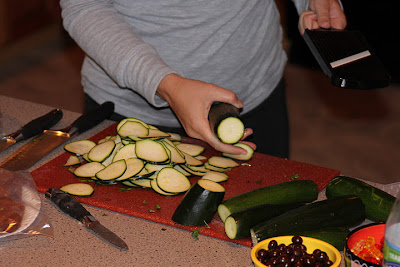 A key step with this recipe is taking the time to toss the zucchini slices with salt and letting it sit and drain for 30 minutes. This may seem strange, but it helps to draw out the excess water so the zucchini is not too mushy and soggy after baking. Also, I thought making the brown butter was a little tricky. My advice is to keep testing it by pouring a little out into a white bowl to see if it’s turning golden brown. Once it starts to brown, immediately turn the heat off and take it off the burner, otherwise it will burn.

I had so much fun at our BATF Feast weekend and the Beauties inspired me with their amazing options for the Thanksgiving table--I was so excited to try Rachel’s stuffing (she nicely modified her recipe to make a veggie portion for me) and I learned you can even make a vegetarian version of Amber’s gravy recipe. Now I’m feeling so much more prepared to host my first Thanksgiving this year. Whether you’re a vegetarian or not, I hope these might encourage you to change it up and try a new side dish alongside the stuffing and mashed potatoes. And for the Ron Swanson’s out there, at least it’s not salad. 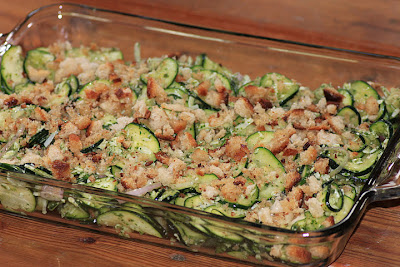 Directions:
1. Heat the oven to 400 degrees. Cut the zucchini into 1/8 inch thick slices. Toss the slices in a large bowl with 1 teaspoon kosher salt and let sit for 30 minutes.

2. Grind all the ingredients for the salsa verde into a paste using a food processor. Transfer mixture into a bowl.

4. Drain the zucchini well and transfer it into a large mixing bowl. Add the shallots, minced garlic, thyme, ½ cup of the salsa verde and some pepper. Toss to combine and add the cheese and half of the butter-coated breadcrumbs. Toss again and taste for seasoning.

5. Place the mixture into a 9x9 gratin dish. Scatter the remaining breadcrumbs over the top and bake for 40-45 minutes, until the zucchini is tender and the top is crisp.