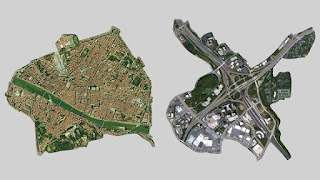 The very concept of sprawl is pre-determined by available space. No space, no sprawl. It leads to a larger point, about place versus non-place.

My, how I detest auto-erotic automobile supremacy.

A few years ago, our good friend Steve Mouzon (author of The Original Green) shared this graphic on his blog: a juxtaposition of the Renaissance-era core of Florence, Italy with a single freeway interchange in Atlanta, Georgia. It has made the rounds repeatedly in various urbanist and transportation circles ever since.

Mouzon’s graphic (above) is intended to make a point about the gargantuan amount of land consumed by automobile infrastructure, particularly when it’s intended for high-speed driving. Speed requires wider turn radii, wider lanes, wider medians and shoulders, and buffer space to separate people and buildings from that fast, deadly traffic. The result: the same land area that could accommodate a bustling urban district of tens of thousands (Florence in 1425 had an estimated population of 60,000) is easily consumed by a single interchange.

Supersize that to the scale of a metro area like Atlanta’s, with all of its similar freeways and subsidiary feeder stroads, and you have a place where the actual destinations people want to get to are pushed so far apart by all this road space that it becomes inconceivable to travel between them without a car—necessitating even more land-hogging car infrastructure, in a vicious cycle.