Building From A New Blueprint


When recruiting new businesses, East Tennessee economic development officials have long touted the benefits of partnering with the Oak Ridge National Laboratory and the University of Tennessee.
The lab and the university both have a history of working closely with private business to develop cutting-edge manufacturing techniques, technologies and new products. That research effort recently received a major boost with President Obama's announcement of a new manufacturing innovation hub based in the Knoxville area.
The Institute for Advanced Composites Manufacturing Innovation (IACMI) led by UT, ORNL and other founding partners will focus on finding ways to slash the cost of manufacturing advanced composites, to make them more efficiently and make them easier to recycle.

EDWARDS"We've known for some time about the synergy we have between the lab and UT in research on composite materials and, in particular, carbon fiber, which is the building material of the future from bridges to cars to coffee pots," says Mike Edwards, president of the Knoxville Chamber.
The manufacturing innovation hub will attract new companies to East Tennessee, bringing thousands of new well-paying jobs to the region in the years ahead, Edwards adds.
"We've got prospects we're talking to today that are composite focused," he says, but for competitive reasons, won't say publicly which companies the Chamber is recruiting.
The public-private partnership is funded by $70 million from the U.S. Department of Energy and $189 million from IACMI's partners, including $15 million from the Tennessee Department of Economic and Community Development.
The partnership includes 122 companies, nonprofits, universities and research laboratories, including leading manufacturers, material suppliers and software developers from across the composite materials industry. 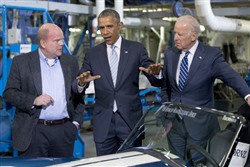 Lonnie Love, designer and manufacturer of a Shelby Cobra 3-D printed at Oak Ridge National Lab, talks with President Obama and Vice President Joe Biden talk about the car during the January visit to Techmer PM, a plastic fabrication company in Clinton.(AP Photo/Carolyn Kaster)
IACMI is the fifth of eight manufacturing innovation hubs planned by the Obama administration. Previously established hubs are already attracting private investment and creating jobs.
General Electric announced in November that it would invest $32 million in a new 3-D printing research facility in the Youngstown, Ohio, region, to be near America Makes, a manufacturing innovation hub focused on reducing the cost of 3-D printing.
Good for region, all of Tennessee
The decision to base IACMI in East Tennessee establishes the region as the national headquarters for advanced composites research and product development, explains Tom Rogers, director of industrial partnerships at ORNL.
As such, the region will be a magnet for the automotive, wind energy and other industries that will benefit from advanced composites research and technology development. 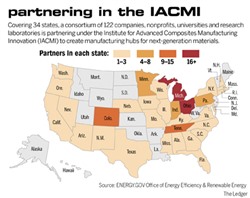 "For all of Tennessee this is a real economic development opportunity," Rogers adds.
Current manufacturing costs of advanced composites limit their use to high-cost products such as aircraft, military vehicles, satellites and luxury cars. Bringing manufacturing costs down will broaden the market for next generation composites, he says.
Volkswagen, Ford and other carmakers are particularly interested in development of light-weight, high-strength materials that will make their cars more fuel efficient and able to meet new government mileage requirements. Volkswagen and Ford are among IACMI's corporate partners.
Wind energy companies are interested in advanced composites because they will allow development of longer, lighter and stronger turbine blades that will produce more energy. Makers of natural gas storage tanks would also benefit from advanced composites that are cheaper and stronger that metal alloys.
IACMI's potential to attract new advanced composite manufacturers to Tennessee would provide a much-needed boost to manufacturing jobs in the state.
Automotive supply chain
Manufacturing's share of total nonfarm jobs in Tennessee will fall below 10 percent by 2024, down from 15.2 percent in 2004, according to a report by UT's Center for Business and Economic Research.

EIGHMYNext generation composites will benefit a wide variety of manufacturers, but Taylor Eighmy, UT vice chancellor for research and engagement and co-chair of the IACMI board, notes the institute's initial focus will be on producing "carbon fiber that works well in the auto industry at the right price."
This work will accelerate the location of automotive supply chain companies to East Tennessee and has the potential "to have a profound impact on the regional economy," Eighmy explains.
Building a strong supply chain network in the region would be a tremendous boost for Tennessee's growing automotive industry.
Volkswagen, Nissan and General Motors have invested billions of dollars in Tennessee plants in recent years and anything that cuts their manufacturing costs will strengthen their presence in the state, Rogers says.
Companies in the composites supply chain will find their way to Tennessee as manufacturing costs come down, Rogers adds.
"If we're able to get the manufacturing costs down by 50 percent and get processing times down the (advanced composites) market is going to quadruple for automotive alone in next three to five years alone," he explains.
Vanderbilt plays role
Researchers at ORNL and UT will work closely with their counterparts at Vanderbilt University to develop the most cost- and energy-efficient composite materials.
Researchers at Vanderbilt are developing tools that will make the machines that make advanced composites smarter, says civil and environmental engineering professor Douglas Adams.
"The neat thing about composite materials is that they are made of a lot of different components and you build them layer by layer," Adams says. " … We're developing tools that let you monitor the quality of the material layer by layer and make corrections on the fly."
Being able to quickly test the quality of the material and make necessary changes will help bring down the cost of manufacturing composites.
Being part of the IACMI project is a unique opportunity for students and researchers at Vanderbilt's Laboratory for Systems Integrity and Reliability, Adams said.
Knowledge of composites testing will give the students a competitive edge as they enter the workforce, adds Adams, co-director of the LASIR lab.
Techmer looks to future
Existing East Tennessee companies are already benefiting from the research being conducted by ORNL, UT and other institute partners.
Obama and Vice President Joe Biden visited one such company – Techmer PM in Clinton – when the president announced creation of IACMI in January.
Techmer Chairman and CEO John Manuck said in a news release that creation of IACMI "will add significantly to our regional manufacturing activity, paving the way for further innovations, manufacturing job opportunities, and products in the marketplace."
During their visit to the Techmer plant, Obama and Biden saw an example of the Techmer-ORNL partnership – a 3-D printed carbon fiber car. The replica of a Shelby Cobra weighs about half as much as the original car.
Reducing the weight and the cost of advanced composites is a game changer for the regional economy, the Chamber's Edwards says.
"We've got a ways to go yet on the price, but technology will get there," Edwards adds.