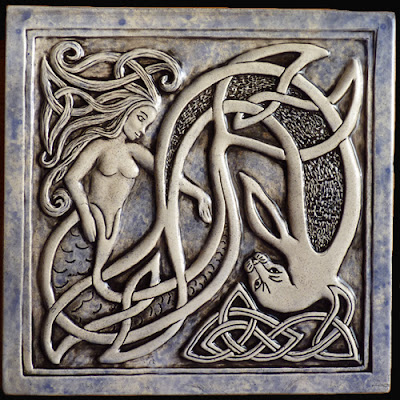 Our new relief carved 8"x 8" Celtic Mermaid and seal tile.http://.com/
A mermaid found a swimming lad,Picked him for her own,Pressed her body to his body'Laughed; and plunged downForgot in cruel happinessThat even lovers drown.                                     William Butler Yeats
Tales of mermaids and their many interactions with humans have been around for centuries. They form a large part of seafaring lore, especially, but not exclusively around the coastal areas of Britian. Although most stories are of sea dwelling mermaids, many are told of them haunting rivers and deep pools. The name mermaid is often used to describe a range of supernatural water creatures.The classic mermaid known in western cultures is derived from Celtic legend, folklore and local sealore in places where people were in contact with the sea as part of every day life.Christopher Columbus logged that he had seen mermaids on his journey to the new world and was suprised that they were not more attractive. The popular belief is that it was actually manatees he saw.