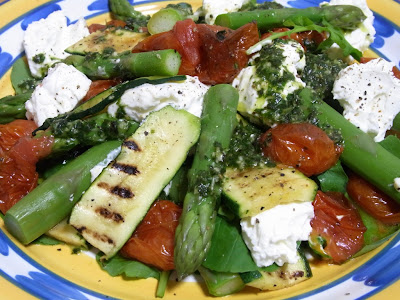 When I was in Ikea for a bookcase to corral my ever-expanding cookbook collection (I swear that they reproduce all by themselves; it's nothing to do with me!), I found a cast-iron ridged grill pan/griddle. Ooohhh. I've been wanting one of those for soooo long. The Young Man said he'd chip in to get it for me as a Christmas present (he can be a real sweetie like that and he certainly knows the way to his mother's heart (g)).

Admittedly, this is a little bit fiddly, but the results are sensational. The YM was totally blown away by this, and was showing it off at school the next day. That is without the manouri cheese, which, even if available here, would probably cost an arm and a leg anyway (butter is now up to 360 yen for 200 g. It's an outrage!).

Instead, I drained plain yogurt in a kitchen towel-lined sieve for a day. That is longer than I've ever drained yogurt, but in truth, it wasn't long enough to get a really cheese-like firmness. Not to worry, it was very tasty just the same. Next time I'll just start the night before. The cheese is chargrilled, too, in the original recipe, but drained yogurt would just melt at that temperature, so we didn't go there.

I was so pleased with the semi-dried cherry tomatoes in this recipe that I've since made up a whole batch (dried for an hour and a half) and put them in a jar with olive oil. Yum! These are going to go in some homemade bouillon I'm going to make based on this River Cottage recipe highlighted on 101 cookbooks.

1 The night before, drain yogurt by drain yogurt in a kitchen paper-lined sieve over a bowl in the fridge. You should end up with a large disc of yogurt cheese.

2 Preheat the oven to 170 degrees C. Mix the tomatoes with 3 tbsp of the olive oil and season with some salt and pepper. Spread out on a baking tray lined with baking paper, skin side down. Roast in the oven for 50 min or until semi-dried. You can leave them in for a bit more or less, depending on how dry you like them. Remove from the oven and allow to cool.

3 Meanwhile, trim the woody bases off the asparagus and blanch for 3-4 min in plenty of boiling water. Drain and refresh under cold water, making sure the spears are completely cold. Drain well again, then transfer to a mixing bowl and toss with 2 tbsp of the remaining olive oil and some salt and pepper.

4 Slice the zucchini thinly lengthwise. Mix in 1 tbsp of the olive oil and some salt and pepper.

5 Place a ridged griddle pan on a high heat and leave there for a few minutes. It should be very hot. Grill the zucchini and asparagus , turning them over after about 1 min. You want to get nice char marks on all sides. Remove and leave to cool.

6 To make basil oil, blitz all the ingredients in a small food processor or blender.

7 To assemble, arrange the rocket, vegetables and drained yogurt in layers on a serving plate. Try to build the salad up while showing all the individual components. Drizzle with basil oil and serve.