This month has been a very busy month, which is reflected in the lack of posts for July. I have made a point to keep up a minimum of four posts each month, so in such busy times I turn to a never-failing source for material: poetry. As regulars will have noted, I usually go to a handfull of my favourite poets for these filler-pieces, mostly because I know these poets well, but sometimes because I find works unfamiliar to me which compel me to share them.

In this case, I have chosen one of the possibly lesser-known sonnets from Edmund Spenser's cycle Amoretti, little love songs. This sequence comprises 89 sonnets in the Spenserian stanza - a scheme far superior to the Elizabethan sonnet in my opinion - and they portray Spenser's courtship of his bride-to-be Elizabeth Boyle in the course of 1594. The sonnets shift in tone throughout and give the impression of being written day by day in the course of the courtship, as if it were a lover's diary, although this might be a mere fiction constructed by Spenser.

Like many of the poems, Sonnet LIII employs animal imagery to describe Elizabeth Boyle's responses to Spenser's courship, and in many cases - such as here - Elizabeth seems indeed to be the active, courting part, while the courted poet finds himself subject to forces beyond his mastery. The idea of the panther as a beast capable of attracting animals goes back long into the Middle Ages, whose bestiaries explained the panther as an allegory of Christ. Like Christ, the panther's sweet voice drew animals from the desert, as can be seen in the illumination below. Spenser's panther is different - some might say more modern, although that should be said carefully - and a seducer with evil intention. Moreover, in Sonnet LIII, the attraction of the panther is its spotted hide, not its mellifluous voice.


Amoretti LIII
The panther, knowing that his spotted hydeDoth please all beasts, but that his looks them fray,Within a bush his dreadful head doth hide,To let them gaze, whylst he on them may pray.Right so my cruell fayre with me doth play;For with the goodly semblance of her hewShe doth allure me to mine owne decay,And then no mercy will unto me shew.Great shame it is, thing so divine in view,Made for to be the worlds most ornament,To make the bayte her gazers to embrew:Good shames to be to ill an instrument!But mercy doth with beautie best agree,As in theyr Maker ye them best may see. 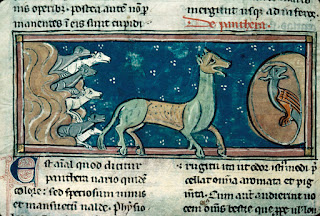