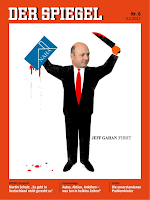 I've decided to disengage from the 9th district congressional race, at least for while. It remains my hope to vote for a progressive candidate, a designation naturally excluding the incumbent Trey Hollingsworth from consideration.

Al politics is local, and my vote will be determined almost entirely by how Democrats, both as a party and as individual candidates, deal with (or without) Jeff Gahan's ongoing public housing putsch.

I await a sign. That's all there is to it, and when those tea leaves come together through the magic of computer animation to form a clenched fist, I'll be back.

Meanwhile, Floyd and Clark County Stonewall is sponsoring a 9th district Congressional Candidate Forum this Sunday, November 19. It will be held at the 300 Spring event venue in downtown Jeffersonville from 4:00 p.m. to 6:30 p.m.

With victories across America, November 7th was a great night for Democrats! We hope this portends good things for the 9th District.

We are SIX months away from Indiana's Democratic primary and Flark Stonewall is hosting a forum so we can get to know our candidates! All Democratic candidates for Indiana’s ninth district congressional seat have been invited to attend this forum and answer questions about issues that are important to the LGBT community and to local Democrats in Southern Indiana. While there will be a focus on LGBT issues, questions will range on many topics within the district and nation.

We hope you can submit a question and attend!
Interested parties may submit questions in advance of the forum, via Survey Monkey. Here's mine.

There has been no shortage of Democratic commentary about a Republican mayor's plan to displace low-income residents from the Pleasant Ridge neighborhood in Charlestown, and yet next to nothing has been said about a Democratic mayor's squalid moves to demolish half of the public housing in New Albany absent a credible plan to rehouse. Why the disconnect, and what do the candidates think about the public housing controversy in New Albany?