Friday Brew: What The Others Said…

While one of Asian cities' challenge is to become more and more compact, while its urban population is growing fast, a question to ask is that of treatment of streets. Asian streets are unique.

Cities with over 10 million inhabitants. Originally appeared on BBC
> This image of the earth at night shows where the population of the world is crowding together into major urban areas.
By the middle of the 20th Century this urbanisation had led to a new phenomenon: the megacity —
an urban area with over 10 million inhabitants.
These streets have a variety of societal functions — even though each city has its personal use of streets —, Asian Urbanist notes: business space, gathering space for families and friends, to name a few. Major activities along the street are window-shopping, eating, park going and other recreational activities favored by Asian urbanites. Yet land issues — lack of land, constrained spaces, to name a few — leading to a minimum area for living spaces transform the street into an extension of interior spaces. The question that Asian Urbanist asks — a question that must be considered as fundamental for a better quality of life of Asian cities — is "how compact and how dense can we go while maintaining not only the quality of our streets and public spaces but also the quality of life of the residents. Urban designers and architects are facing a mounting challenge to create high quality living and working environment within tight space constraints."
At a larger scale, while compact cities are becoming the key to high quality urban spaces, it raises questions. Let's choose one: urban population growth. How to deal with urban population growth while the objective is to become more compact? Which leads to the following question that Nicolas Ladouce asks: "Are our cities ready for the Compact City model?" Cities require a realistic planning, as the same Nicolas Ladouce adds, to provide all the needs that will improve living conditions, reduce insecurity, increase jobs stock — let's dream — lead to a better energy efficiency, etc.. Some cities are struggling to cope with their growing population, increasing insecurity and insufficient housing, in a nutshell. The lack of clear vision and the ability to foresee and plan for realistic growth is what has hindered the ability of these cities to adapt. Realistic figures are required to help define priorities and prevent incoherent piece-meal development. If some observers are a bit skeptic about compact city, most of them call for compact cities. Compact cities appear to be the environmental solution since they are urban but nonsprawling form; they reduce pollution and consumption of resources. It is true that, as cities gather more than 75% of world's population — in the U.S. 83% of the population live in cities —, it is no wonder that growth as well as economic activity impact both population and environtment. For Kaid Benfield, the key to a better living condition in cities and high quality of urban infrastructures is that cities must have great neighborhoods and complete streets, with walkability and well-functioning public transit, with clean parks and rivers, with air that is safe to breathe and water that is safe to drink.
Can Compact cities really be a solution? Some cities, in particular in Latin America and India — which delight in a recent great dynamism — are facing with congestion, housing shortages, pollution and lack of urban planning. These megacities are poorly planned and unsafe, The Economist reports. Consequently, one can wonder if compact city model can be a key to developed and developing megacities.
Apart from overpopulation, another issue important to be mentioned is that of rising sea levels. Bangkok is one of these megacities that will face this issue by 2050 according to a UN study. As Bangkok is becoming more and more crowded, the city suffers from both air pollution and sea level rise. Bangkok is characterized by its topography. It is surrounded by polluted water fields due to its recent economic growth. S+PBA recently propose a city that adapts to these environmental, economic, social and demographic constraints. This city will be based on waterworld-like plan. Called Wetropolis, it is announced to allow residents of Bangkok to live with natural flooding instead of resisting it while creating a homeostasis that detoxifies the region's polluted waters. Vegetation is composed of a forest of indegenous mangroves, which the government is already trying to implement in Bangkok. Mangroves naturally filter water, and they also supply fresh oxygen and natural cooling. As the watr is filtered, shrimp farming can flourish in a sustainable manner. The community of Wetropolis will live above the water fields in a network of interconnected homes, walkways, and roads, with curvaceous lines that emulate the rippling water. 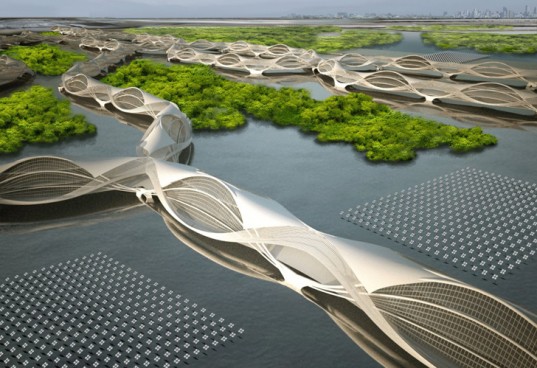 Wetropolis, Bangkok © S+PBASad but unfortunately true: Rio's favela dwellers will be displaced in the rush to be ready for The World Cup and Olympics, Sam Green reports in The Independent. Of course the authorities intentionally avoid collective negotiating: "This is done to fragment resistance. They negotiate family by family, so one family agrees to sell up, their home is demolished immediately and the value of the property next to it is lowered. Thus people are set against each other." This confirms what it is reported above: lack of housing, overpopulation, lack of planning…, of Latin American cities…