Gratitude, For The Millionth Time

I am a little bit at a loss for words about your response to last week's open letter. This heart-stoppingly aggressive thing happened to us, only the net result was, crazily enough, buoyantly positive. Because not only a) did I get to see Ben angry for the first time ever, but then b) by the time we were in the car, he was already laughing that the whole thing had been worth it for the good story we'd be able to tell. (Plus, the next morning he said, brushing his hair, "Now I don't even want to trim my split ends!") And also c) the wagons circled fast and tight. And d) our people near and far, known and unknown to us, expressed their empathic outrage in, literally, hundreds of ways. Thank you, oh thank you.
And as far as the questions about the guy and what his problem was or might have been, his problem was--to put it plainly--masculinity. Although Birdy, when I was saying aloud, in response to a particular strand of comments, "Is this guy autistic? This guy's not autistic--this guy's an aggressive dick!" Birdy, maddeningly fair-minded Birdy, said, "But Mama, isn't your whole point that you don't know who people really are, what their whole story is, just from looking?" Such a pain in my arse, that kid. 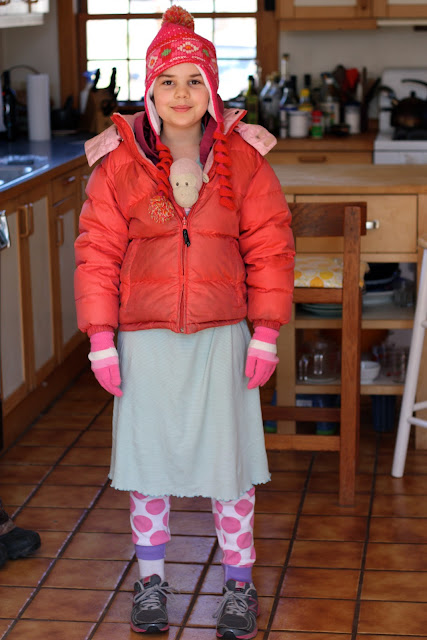 And what, my darling girl, would our yelling friend have to say about *your* particular style of self-presentation? With love and gratitude and the promise of the regular good stuff soon, like tasty vegetables and holiday crafts, I swear.