He Was An Errant Knight 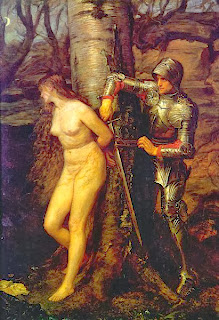 Mylde answer made: he was an errant knight
- The Faerie Queene, Edmund Spenser

A few days back I was roaming the Internet for Pre-Raphaelite paintings, when I happened to come across this beautiful piece by John Everett Millais (1829-96) from 1870 titled "Painting the Knight Errant". The title is a little misleading since, at least to the modern mind, it implies a meta-dimension, but this is not the case. The painting is a lovely composition and showcases the enthusiastic and fertile medievalism embraced by the Pre-Raphaelites.

Millais has chosen has his subject the errant knight, an important figure from medieval romance and renaissance epic. The most famous examples from English literature are found in Edmund Spenser's Faerie Queene, modelled to a significant extent on the great 16th-century Italian epics like Orlando Furioso by Ariosto (1474-1533) and Gerusalemme Liberata by Torquato Tasso (1544-95). Spenser's well-wrought allegory features several of these knights errants, who were armed soldiers roaming the world for quests and challenges, but not all of them are honourable or protagonists. What defines a good errant knight appears to be the nobility of the quests he agrees to undertake, and sometimes the grand, overarching quest which leads him through the world, such as The Redcrosse Knight's quest to liberate the Faerie Queene from a monstrous dragon.

The notion that the errant knight could have a potential for evil was also picked up by Alfred Lord Tennyson in his Idylls of the King, where he notes that before Arthur gained proper control of the land, many an errant knight could be found throughout it, and Tennyson uses them as one of the symbols of anarchy and chaos preceding the golden age of Arthur. The errant knights of Idylls of the King are markedly different from Arthur's knight in that they leave Camelot first when they have a quest, rather than sauntering throughout the world on the prowl for one. It is also emblematic that Geraint, after he has fallen prey of jealousy and succumbed to the intrinsic darkness, takes his wife Enid and wanders aimlessly about just like an errant knight.

In medieval romance and in renaissance epics, the trope of the errant knight is a brilliant pretext for action and an excellent way of making the adventure move from one location to another, and this was exuberantly taken advantage of by the epic poets of the 16th cenutry.