Histrionic Historicity - Or Why We Need Historians


As every historian learns to know at some point, the conveying of historical fact and historical narratives is fraught with numerous challenges and difficult choices. To write about historical issues is therefore a delicate matter, and to navigate and negotiate vast chronologies or to assemble a bric-a-brac of historical material, require great care and sobriety. It is therefore always frustrating and saddening to me when an unprofessional decides to dabble in history and present it to an audience, without the proper methodological schooling or awareness. This blogpost is a response to a recent example of such dabbling, a piece on the Vikings written by Irish journalist and Middle East correspondent Patrick Cockburn, published in The Independent. The piece in question was a response to the current Viking exhibition at British Museum.

In my response, I do not wish to be facetious, nor do I wish to be ungenerous, and I will therefore state rightaway that I sympathise and agree with Cockburn's major point, namely that the Vikings were a band of brutal warriors who were responsible for great atrocities, and that in our times there is a certain revisionism that tends to downplay this aspect of the Viking culture. This basic point is true. Murder, rape, enslavement and pillage were all part of the job description for a Viking, and these are not to made a trifle of. The problem is that Cockburn commits so many methodological fallacies and descends into rhetoric and ahistoricity that this central point disappears in comparisons that are obfuscating rather than clarifying, in a rhetoric that is histrionic and in a presentation of history that is grossly imprecise and simplistic.

Things go awry from the very beginning, as the lead paragraph states that "Norsemen carried out atrocities to equal those of the German SS". This is problematic on several levels, and if one of my students had written this in an essay, I would have refused to let him pass and given him a severe scolding for such anachronism. And this is the first issue, namely the juxtaposition of two phenomena separated by almost a millennia, which arose in widely different cultural and political contexts and that overall are not in any way connected by historical developments. There is no trajectory that ties the Vikings and the Waffen SS together, and a juxtaposition of these historical categories are consequently pointless and vastly problematic.

Furthermore, it does not make sense to juxtapose these the Vikings and the Waffen SS because they do not belong to the same historical categories. First of all, a Viking denotes a man with a certain modus operandi, working in teams, but initially not as a part of a codified or unified programme. The unification came to some extent later, when Danish kings like Ivar Boneless or Canute the Great organised mass pillaging in Britain, but they were not bound together by an overarching ideology. The Waffen SS, on the other hand, was a group of people united by a common codified political programme and vision.

Moreover, the term Viking denotes people inhabiting a long chronology and a large geographical area. The traditional dating for the Viking period is 793-1066 and this period was marked not only by Viking raids but also by Norse settlement and interaction. Every series of raids and every large-scale invasion was a response to circumstances that were specific to its contemporaneity, dependent on concerns, personal choices and a thousand factors that were impossible to map back then, and more so in our time. The Waffen SS, however, was comprised of a group of people from a limited geography and a very short period of time. Even though each member of Waffen SS had his own personal reasons for joining, each member was suffused by an ideology that presented a specific world-view and operated within a nationalistic construct. In short, the genesis of Waffen SS was driven by a political purpose at a specific cultural and geographical point in history. The Vikings, however, were driven by very material concerns, namely food and riches. In other words, the Vikings and the Waffen SS are not comparable categories at all, and Cockburn's juxtaposition is therefore pointless and fruitless. 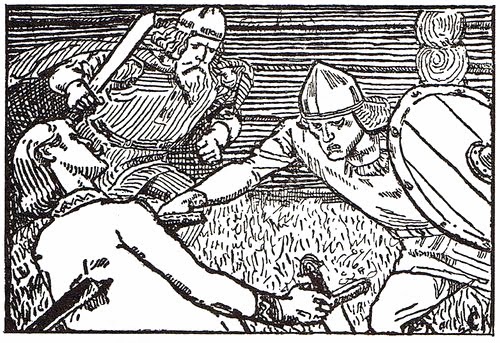 How to die in the Viking age
Illustration to the 1899 edition of Heimskringla by Christian Krohg
Courtesy of heimskringla.no
A troublesome insistence

The fundamental problem in Cockburn's piece is, as stated, a matter of category mistakes. Another, and equally problematic issue, is his insistence on being topical. Throughout his text, Cockburn suggests similaritites between the Anglo-Saxon victims of the Vikings and the victims of the current strife in Iraq and Syria. While the human trauma of both these historical situations are not to be underestimated, it makes little sense to juxtapose them. Again, they grew out of completely different historical circumstances, and to compare these circumstances will add nothing to our understanding of either.

Another problem about this insistence on topicality, is that Cockburn fails to realise that certain terms and concepts are, because of their historical uniqueness, fraught with subtexts that can not be transmitted to other historical phenomena. The Waffen SS committed atrocities directed and subsumed by an imperialist, anti-semitic, eugenicist, nationalistic agenda, and these atrocities are still within living memory. The term Waffen SS, therefore, brings to mind an orchestrated genocide that lacks parallels prior to the 20thcentury, and which evokes great personal trauma that creates a lense which colours any juxtaposition in accordance with these memories. We are, in other words, coaxed into imagining an 11th-century Norseman carrying a swastika and killing people in the name of the Third Reich. This is a manipulation of historical memory which is ludicrously imprecise. It is also extremely disrespectful towards those who were the victims of such trauma, since historical phenomena are jumbled together and assembled in a way which removes them from their own contemporary contexts. Such a strategy is effective, especially in light of the adoption of Norse symbols and culture into Nazism and Neo-Nazism, but it is dishonest. 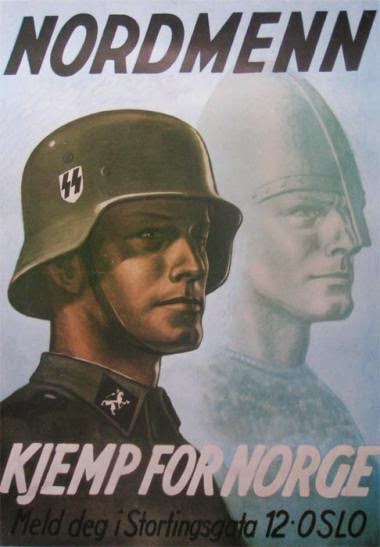 Propaganda poster showing the Norwegian Nazi party's adoption of Viking culture
Courtesy of this website
Incongruities
Having established the fundamental methodological weaknesses and injustices committed by Cockburn, it is time to turn to some of the stylistic incongruities of the piece.
The chief stylistic incongruity is one perhaps most easily detected by the professional historian, and I say this without smugness or arrogance. The chief incongruity is namely the histrionic pathos that emerges from Cockburn's repetitive insistence on topicality, where the Viking raids – gruesome and pitiless though they were – are evocatively but fraudulently presented as the architects and perpetrators of one of the worst genocides history has ever seen. It is reminiscent of Christopher Hitchens' terrible highfalutin bathos whenever he would use the term "medieval" or talk about religion. In other words, Cockburn's tone of voice in his piece is incongruous with the sobriety demanded by a careful historical riposte against revisionism, which he states himself is at the heart of the matter.

Another incongruity is the succession of points made by Cockburn towards the end. After describing the death of Alphege of Canterbury and thus having established the ferocity of the Vikings, Cockburn then moves on to the St Brice's Day Massacre to further his point of the barbarity of the Norsemen. This is a very strange choice, since this was a massacre perpetrated against the Danes by the Anglo-Saxons. Cockburn is aware of this, however and comments that this was the case, which only goes to befuddle the reader, for surely, this does not strengthen his case.
After this incongruity, Cockburn opens his next paragraph by saying "[o]verall, the Scandinavians have a lot to apologise for", and here I will allow myself to be a little facetious, for it sounds as if he criticises the Norsemen for the inconvenience of dying on British soil. Of course, this is not what he means and I do understand his point, but it is so poorly put that it does little service to his central argument. This makes it the final incongruity I will touch upon here, for even though every discerning reader understands what Cockburn is getting at – that the Vikings were responsible for many atrocities – it would nonetheless, considering how he jumbles historical elements about, be very surprising if he were to mean modern-day Scandinavians. In short: Cockburn's anachronistic juxtaposition of historical elements disrupts chronology and presents a simplistic view of how complex history really is, thereby removing all credibility he has in the matter.

As a person who, by virtue of a master's degree in history, is a professional historian, I'm often forced to justify my value to a society increasingly blind to immaterial gain. I don't find this a difficult thing to do, providing I'm given time and place to speak, but it is nonetheless a concern that is constantly at the forefront of my mind. Consequently, I react very negatively when a person who is not professionally trained in the art of history presents a narrative which distorts chronology, ignores fundamental methodological concerns and is void of any humility and nuance. The heart of the problem is when complex historical issues are stripped down to a ludicrous juxtaposition without taking into account historical context, and then presented in a histrionic manner ill-suited for the kind of sober reflection needed when aiming to give an accurate rendition of a historical epoch. Cockburn's piece is a poorly written, highfalutin text that has little value in a debate on historical matters. This is very sad, and especially because I agree with Cockburn's central point: that the atrocities of the Vikings should be at the core of any presentation of their culture. However, because the piece is written the way it is, and because he fails to engage properly with the material, he fails to create a good arena for a debate. To my mind, this is an excellent example of why we need professional historians, lest we sacrifice accuracy and complexity for imprecise simplicity.