IA13 - War Machines Of The Lost And The Damned...redux

I got my infantry out and read more of the army list rules to see how I could re-arrange them to suit the new list and to decide what direction I wanted to go.

This would give me a Command Squad which were Zealots, which combined with their Fanatic rule (allowing me to roll two dice and discard the lowest score when determining their Ld value) should give me a solid Command squad which will hopefully stay around - once boosted with a Sigil and Enforcer (+1 Ld to the squad) they will be solid...well as solid as they can be.

I want the army to be somewhere in the middle of the Chaos line - if one end is just rabble, an untrained horde while at the other end they are resolute, devoted elite these guys will be the middle ground, trained but nothing out of the ordinary. While they need direction and encouragement (the Devotion allows more Enforcers to be taken than normal) they have some level of 'professionalism'. 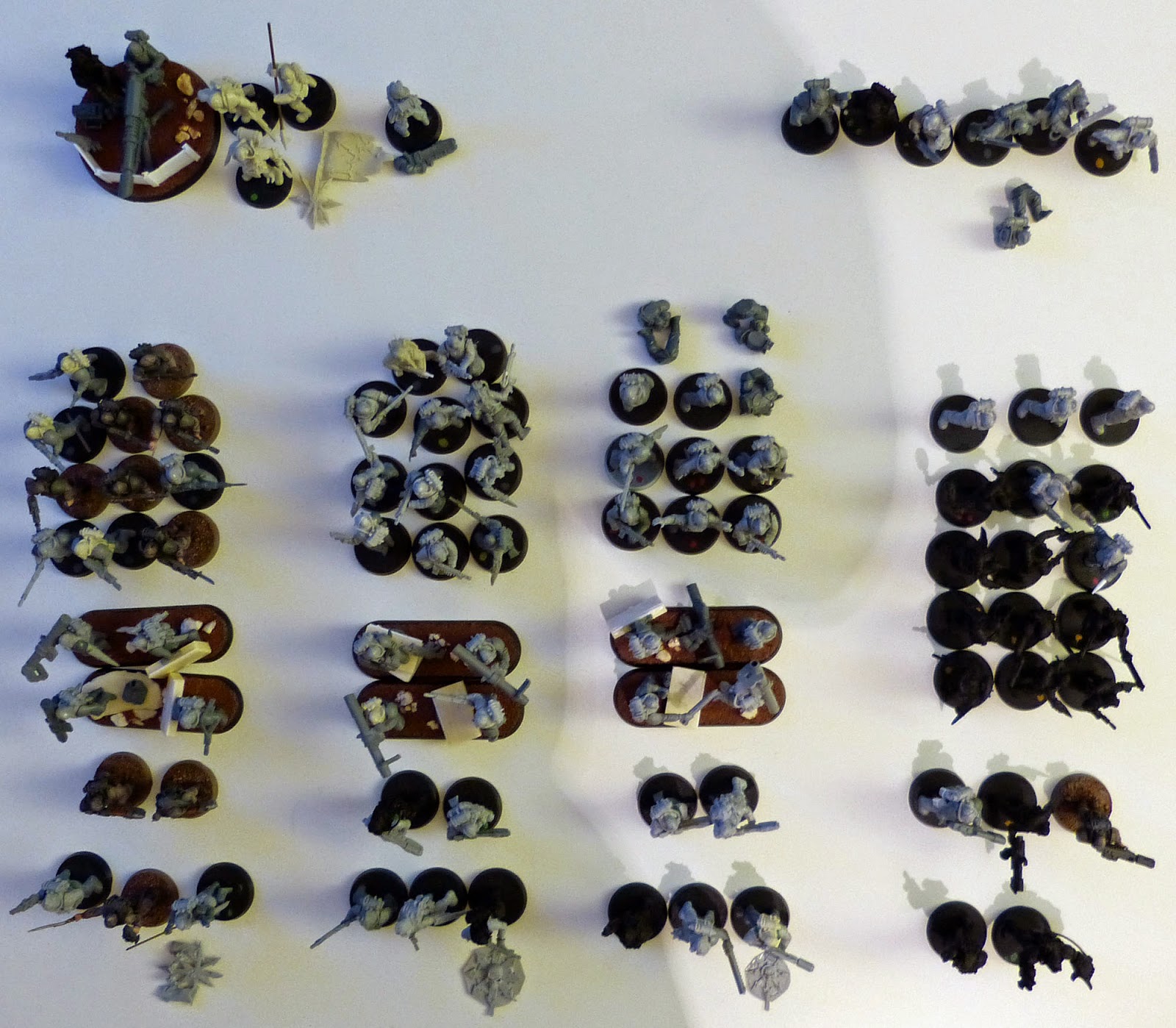 So above you see the infantry laid out.

Three squads form a gun line with 2 missile launchers and 2 plasma guns. With a vox, chaos sigil and attached Enforcer they have the best chance of not running away at the first opportunity.

The fourth squad will be held behind the lines to plug any gaps. Armed with CCW, pistols and toting 2 flamers and a melta gun they'll be hurled in to any dire situation.

I will need to break down and rebuild a number of the models and I'll have to convert a couple of new standard bearers.

My old Demo Charger guys won't be taken apart after all, they instead join the 4th squad. The bombs they wield will stand in for the krak grenades the squad carries.

Top left in the pic is the HQ squad including the Demagogue. To take advantage of the squads BS4 they have a Lascannon and a plasma gun.

Meantime top right are seven Enforcers, enough for these five squads plus my second Troop choice which at the moment I am leaning towards a small Mutant squad, mainly for the fun of converting them...though I may go for Plague Zombies if I take the Covenant of Nurgle for my Demagogue.


Talking of Covenants I haven't decided what to take for the infantry squads. I may go for a mix (such as Khorne for the reserve assaulty squad, with Nurgle on the others to give them more survivability). I may play around with taking different ones to begin with before I decide what to stick with. With my Devotion I also have the option to upgrade these squads by making them Fanatics, but this is pricey so I may go without for now and see how they perform.

Alas I can't find a place for these three: 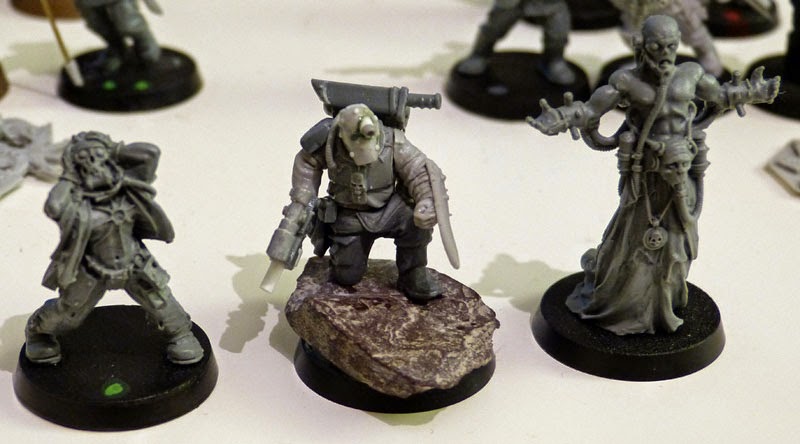 Those two renegade psykers are two of my favourite models in the CRM range, but I just can't find a place in the army they fit. I would have taken the Primaris-rogue Psyker Devotion but it really didn't suit what I wanted the army to be.

To get more heavy weapons in the army I am thinking I will take a HW Squad as a Heavy Support slot. I have five remaining Lascannon teams which I can form into one squad. Might be a bit overkill but it should get the job done.

I am tempted though to mix mortars in with them. Partly because I want to use the models I have built and partly because no matter what the squad will be able to do something - when the Lascannon can't see a target the mortars can still fire at something, plus it would give the squad some very cheap ablative wounds in the shape of the mortars. Something to ponder...

It took me ages to make all of these mini-dioramas for the HW teams...
I still plan on taking a couple of more squads of infantry in the form of either Disciple Squads (Elite) or Vet squads (Troop). They are very similar, while Disciples are BS4 Vets are WS4 and both can take Carapace armour and have access to special weapons - though very limited in number. If I take Vets I may drop the Mutant/Zombie unit.

Disciples can take a heavy weapon but Vets can take a USR's (such as Deep Strike, Scout etc). Overall the two options are pretty equal so I'm a little uncertain which way to go at the moment.


Whatever I do I am currently looking at around 120 infantry models (including Command squad, Enforcers & HW teams). That's a lot. What I will do next is start fleshing out the rest of the army, When I get a better idea of what else I want to take I may come back to the infantry and have a re-think, possible dropping one of those infantry squads. This will come down to points, I can't neglect the tanks and other choices I so definitely want in the army. So many choices...


Oh I will also have some Rough Riders eventually...


Quite a rambling post that...mainly me thinking out loud. Next one will make more sense. Almost certainly.