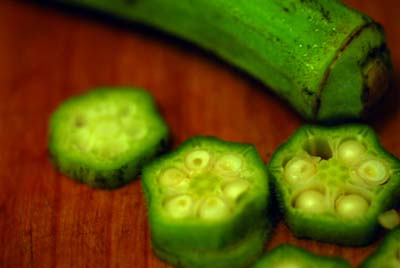 School lunches are a hot topic du jour as the school year has recently begun. Everyone from The New York Times to the New Yorker seems to be weighing in. Most of these articles focus on changing the traditional school lunch from its government sanctioned mediocrity into something that has nutritional value. But of course, lots of kids have a well-formed junk-food palate, and are averse to foods that aren’t deep fried or loaded with sugar. One student in Burkhard Bilger’s New Yorker profile of crusading Berkeley, CA school chef Ann Cooper, laments Cooper’s new vegetable-heavy menus: “…She missed all the meat from last year. She picked at her pink coleslaw. ‘I’m moving to Texas,’ she said.” While it is not explained if she’s really moving to Texas or just wants to move to Texas because she believes there will be more meat served with her school lunch, the comment made me laugh. I don’t remember Texan lunch ladies serving up huge portions of meat, but there sure was a lot of fried okra.

In hindsight, I reckon I was fortunate because my mother made my lunch for me everyday and I rarely ate the stuff served by the cafeteria ladies. But as a kid, when everyone around you has a tray and you’re schlepping a Pigs in Space lunch kit filled with a peanut-butter and banana sandwich on homemade, whole-wheat bread; a piece of fruit; a bag of what she called “miscellaneous” but what I’d now call trail mix—raisins, nuts, and dried coconut; and a thermos filled with milk—well, you’re just not cool. Even the other kids who did bring their lunches got to eat processed meat with American cheese on Mrs. Baird’s white bread, a bag of Fritos, and Zingers. I hated having health-food nuts for parents, it just made me appear weird to me fellow young Texans.
Read more »