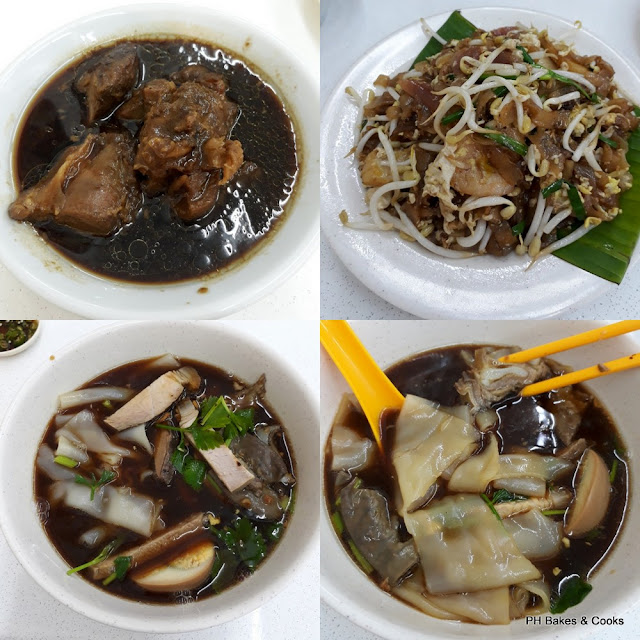 Last Saturday as usual my partner asked me "chiak hamik?" (eat what?). So I took the opportunity to tell him let's try Madam Leow at SS2. 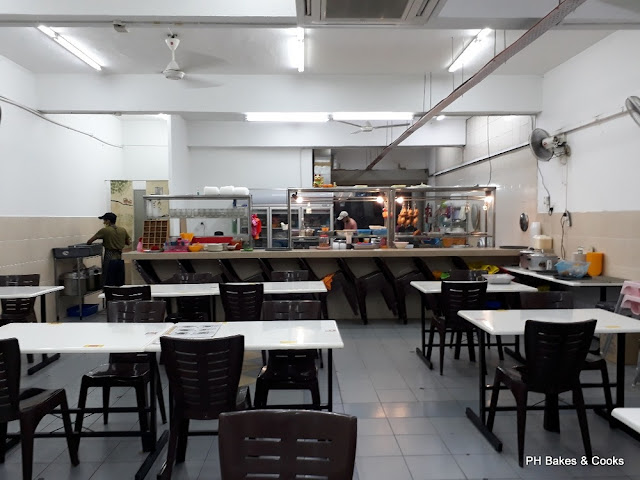 On our way there, it started raining, just a light drizzle fortunately. It was almost 7:00pm when we got there and I was concerned if the restaurant would be crowded. But no. Only one table was occupied and we were free to sit anywhere we liked. 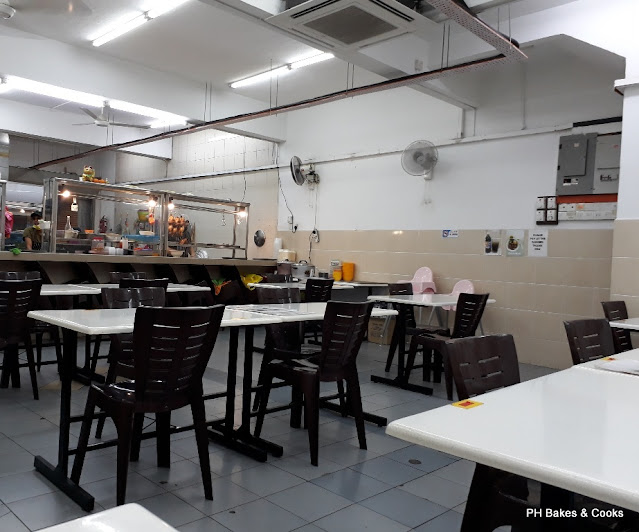 We were attended to by a young man who spoke Penang Hokkien. So confirmed lah that this is betul-betul a restaurant run by Penang lang. Since my partner is from Penang, they had a nice friendly banter.
We were given the menu and we took our time to study what they served. 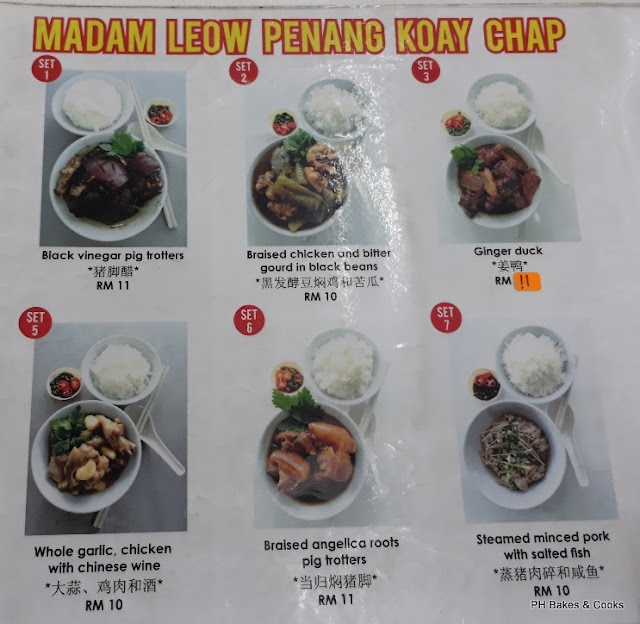 These were the rice sets and I liked what I saw. 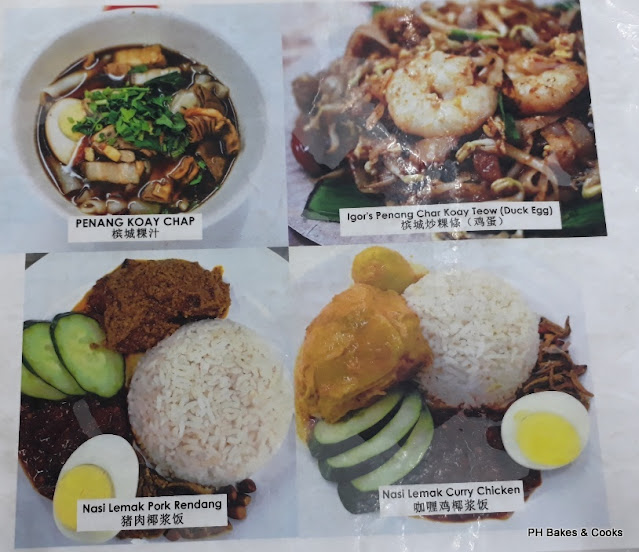 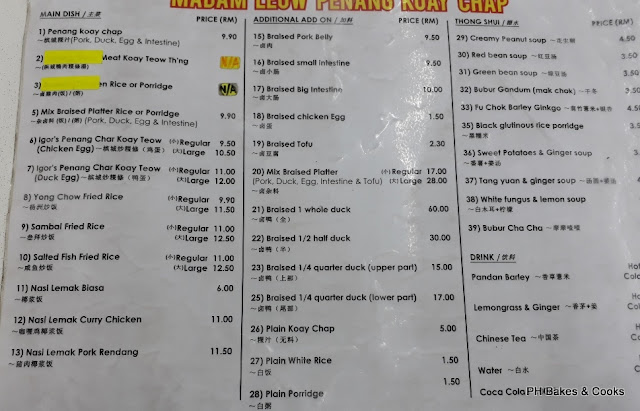 Then there are the add on dishes, thong sui (dessert) and beverages. 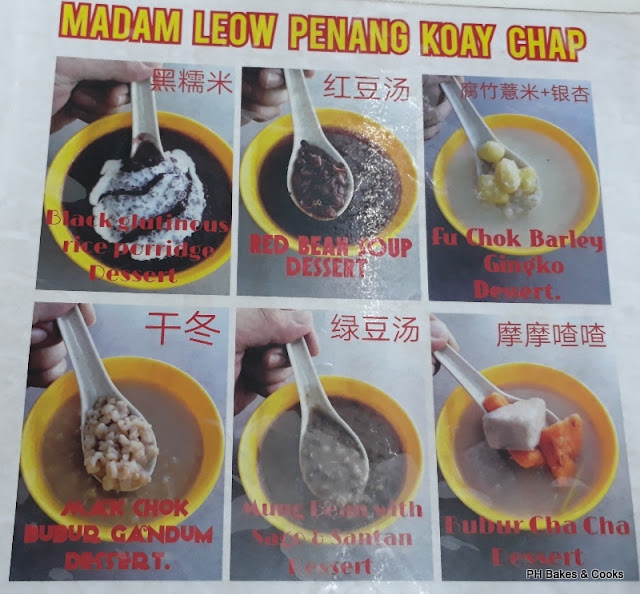 That evening they had only four thong sui - Black Glutinous Rice Porridge, Red Bean Soup, Mung Bean with Sago and Santan and Bubur Cha Cha.
Since I have never eaten koay chap before, that was what I wanted and bubur cha cha (my favorite!). My partner chose the Braised Angelica Roots Pig Trotters rice set. This set came with Chinese tea. For dessert he chose Black Glutinous Rice Porridge. 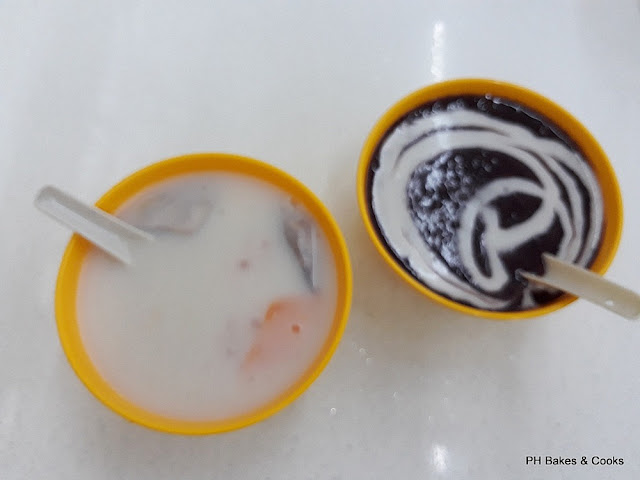 Our desserts came to the table first and we were quite excited because we have not had these desserts for some time. I tried a little bit of my partner's black glutinous rice porridge and I thought it was very good. 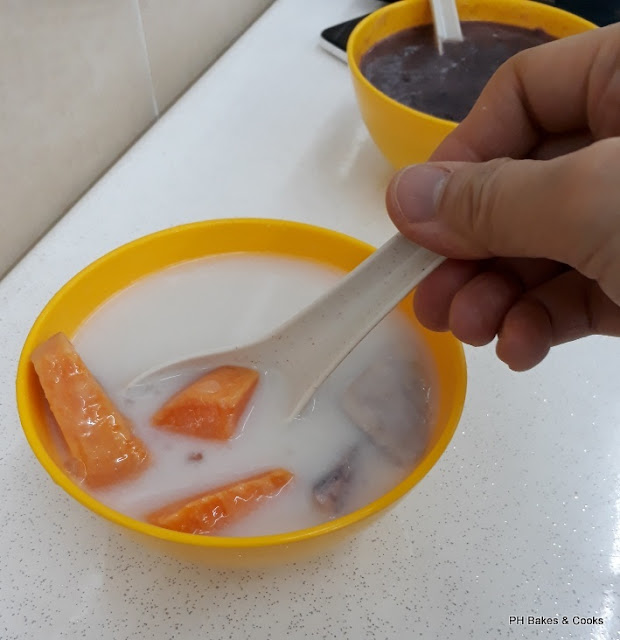 My bubur cha cha was also very nice although I thought that it needed a bit more santan. It was not too sweet and had sago pearls and big chunks of orange sweet potatoes and yam. My partner commented that usually the sweet potatoes and yam are cut into small cubes. Yes, I would have preferred it the usual way but it's no big deal. 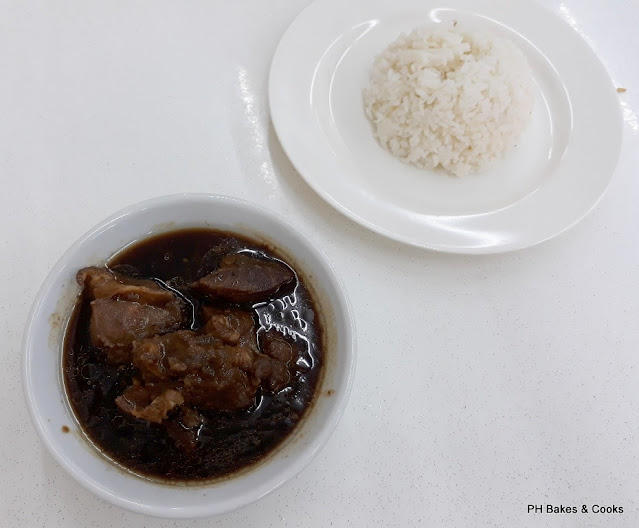 My partner was happy with his order and I tasted a little bit of the pork trotter gravy and found it very flavorful. Perhaps I should order that next time. 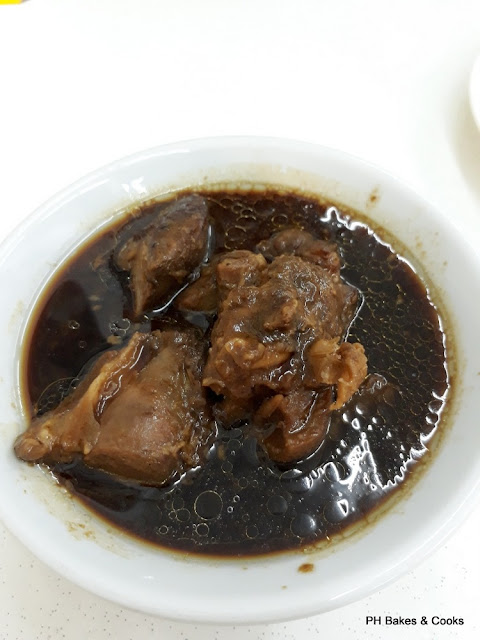 Let's see what I thought of my koay chap. 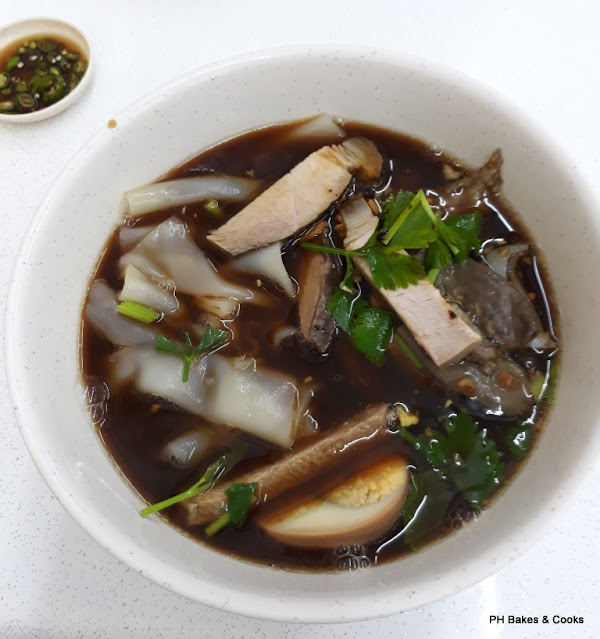 The herbal soup was light tasting and I found it pleasant.  It's something like bak kut teh soup but much milder. There were adequate  meat and innards and half an egg. The koay teow come in broad ribbons unlike regular koay teow. 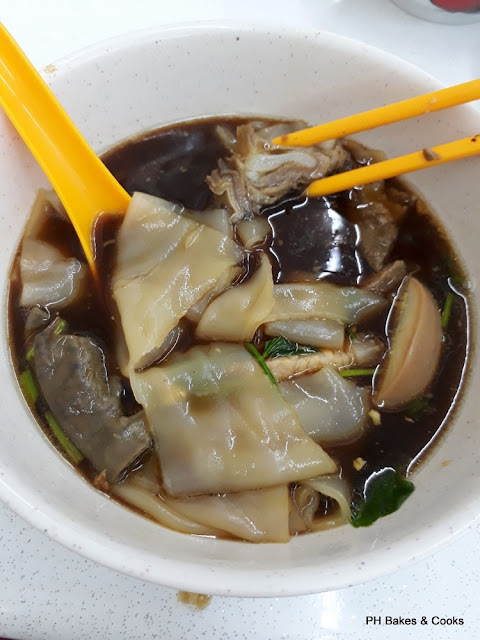 The koay chap was not bad but it is not something that I would rave about.
We also ordered the Igor's Penang Char Koay Teow for sharing. I wonder why this CKT is called Igor's. Who is Igor? I kept thinking of Igor, Dr Frankenstein's or some mad scientist's lab assistant hah..hah...hah... 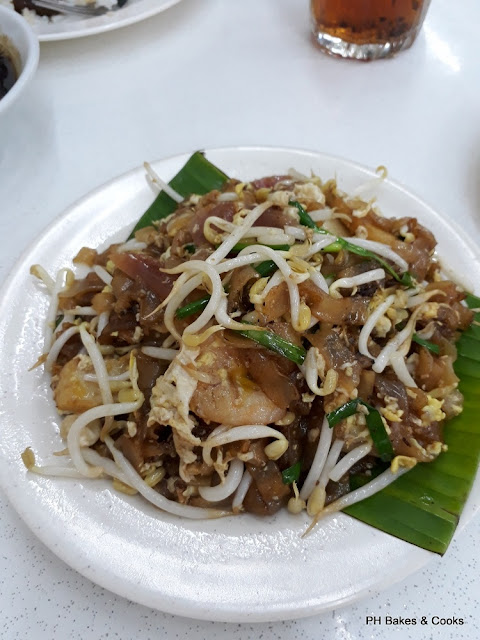 The portion size is quite generous with big fresh prawns. My partner ate his portion first as I was still eating my koay chap.
When I tasted this char koay teow, the first thing I noticed is the absence of wok hei. hmmm...this does not fulfill my criteria for a good CKT. I also would have preferred the lap cheong to be fried until browned. 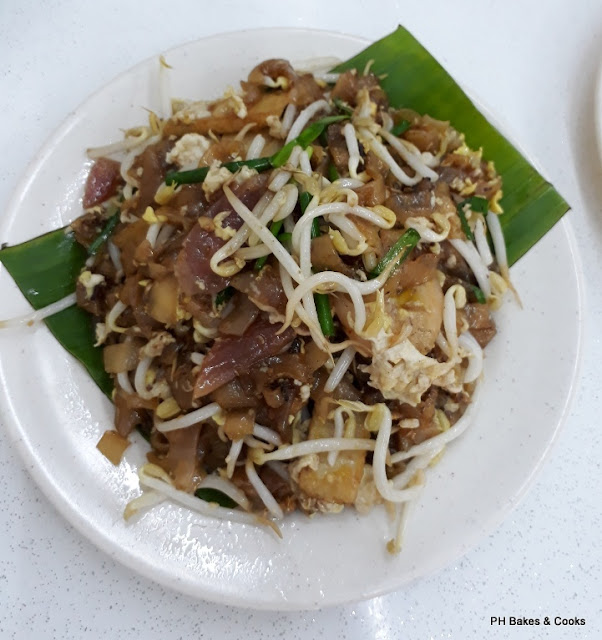 I asked my partner what he thought of the CKT and he said it was so-so only and that he preferred Robert's from Damansara Kim. What a pity because I don't think Robert's is all that good either hah...hah.... 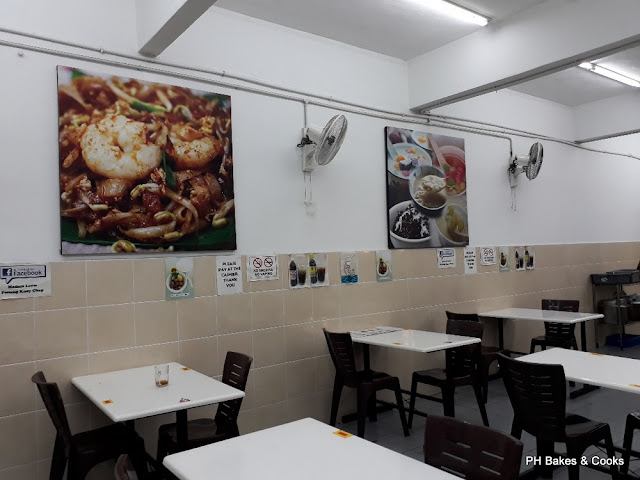 Overall, my partner and I had a good dining experience. The food here is not outstanding but I would say it is better than average. I don't mind coming back again. I think my partner feels the same.
Halfway through our meal, it rained very heavily and when we were done, we waited a little bit for the rain to subside. When it was time to pay, we noted that the lady cashier used a magnifying glass to read the screen. I should get one for myself too to use in the office hee..hee... 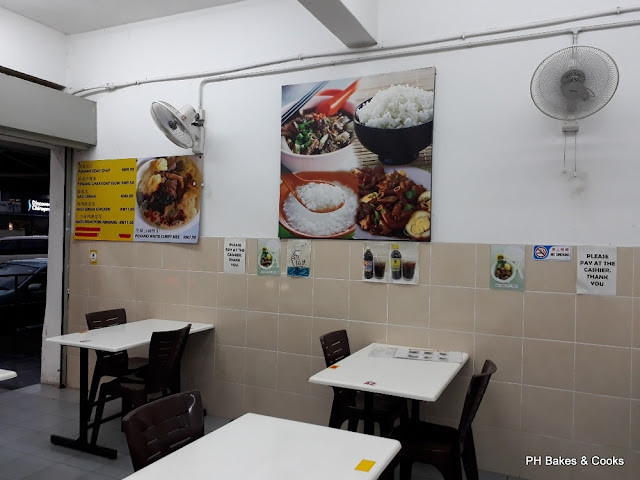 Our dinner costs RM34+ and only cash is accepted here. I do hope that the owner would consider at least e-wallet for customers' convenience. 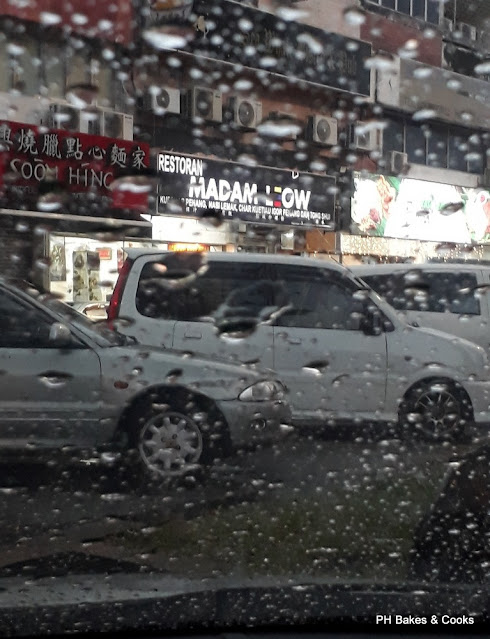 When we got home, Belle Belle was waiting for us at the front door. I was glad to see her because I had let her out in the morning and was concerned if she would return (after being confined indoors again for more than a week). 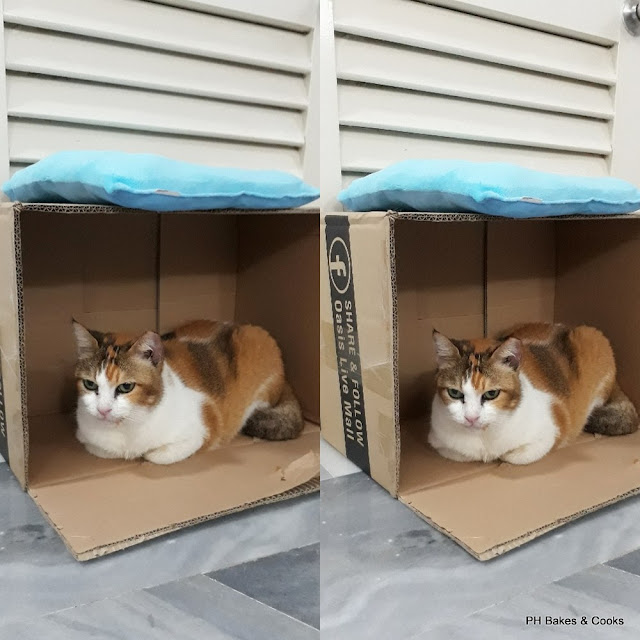 After I fed her, she went inside her box to relax. 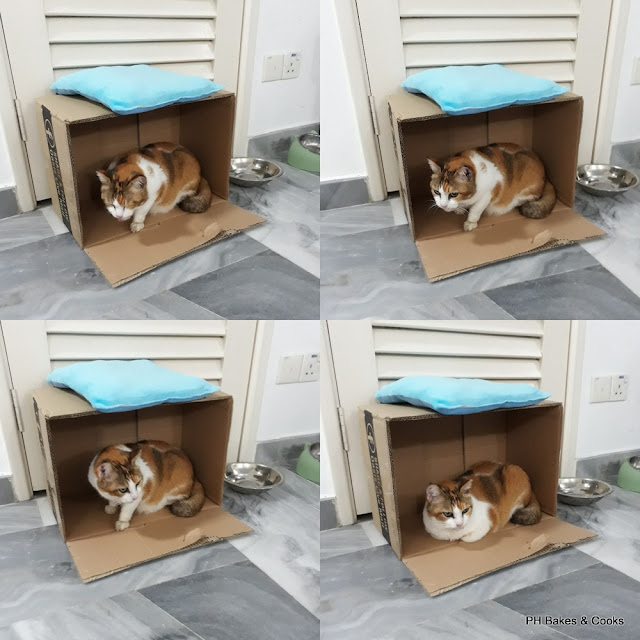 Well, Belle Belle knows that she has found her forever home.