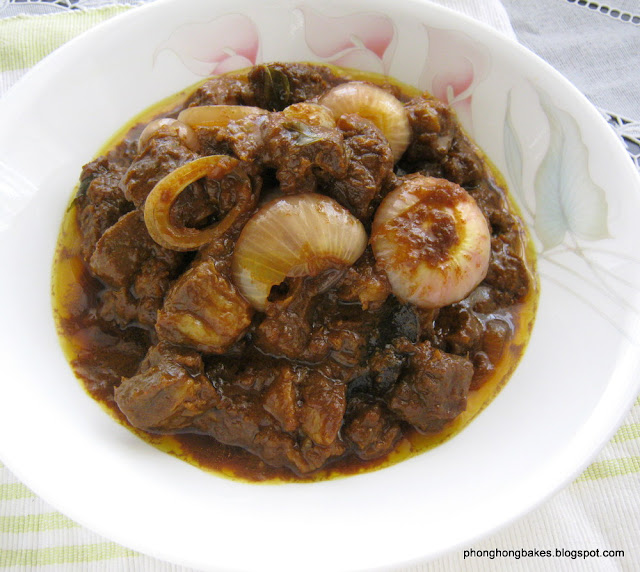 Some things are not meant to be translated. Daging Masak Hitam. Black Cooked Meat. That didn't come out right. Meat Cooked in Black Sauce. That would be most appropriate but it's quite a mouthful. So Daging Masak Hitam it is. Or in this case, Kambing Masak Hitam.
I have never eaten a masak hitam dish so it is a curiosity to me. A few months ago, I read an article in The Star, The Peranakan Melting Pot, written by Nurilkarim Razha. This Nurilkarim fellow is the winner of the 2015 Rage Food Fight.
In his article, he wrote that "Peranakan" is, I quote "the celebration of our cultural melting pot". Then he proceeds to give a DIY recipe for daging masak hitam. Ah! I removed that page from the newspaper and kept it for a time when I could experiment. 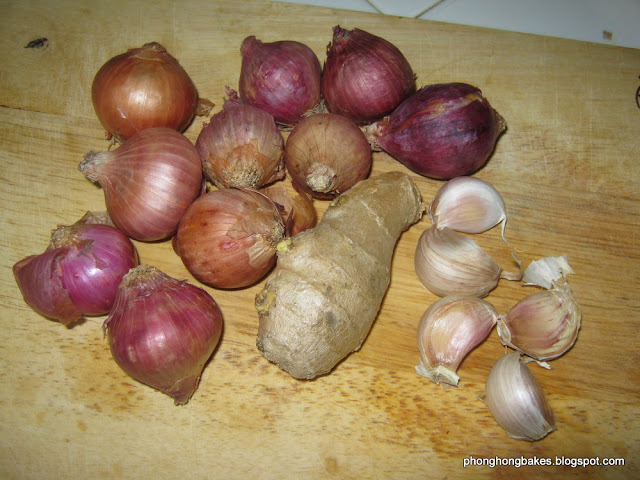 The first step is to marinate slices of beef or lamb with ground shallots, ginger and garlic. No measurements were given so I had to do this free hand.
I did not have any beef or lamb but I had some frozen mutton cubes in the freezer. That will do. There was about 800g of it and I just estimated that I needed 10 shallots, a generous thumb sized ginger and 5 cloves of garlic. Then I took out my mortar and pestle and went pound pound pound! 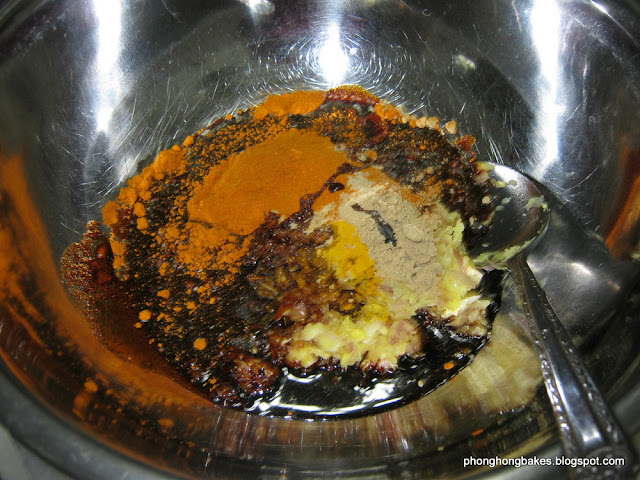 Nurilkarim, this better turn out right.
Then I added one teaspoon of turmeric powder, 1 heaped tablespoon of fennel powder, 1 packet of Baba's meat curry powder and 1 cup of kicap manis (sweet soya sauce).
The mutton cubes were marinated with this mixture overnight. 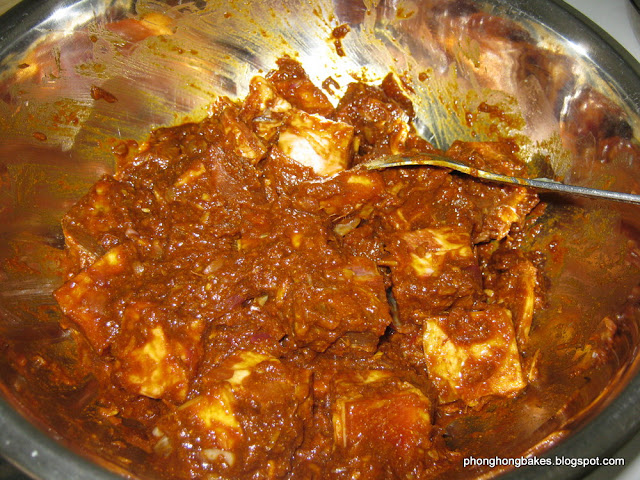 The next day, I dumped the marinated mutton into the slow cooker and added some oil, asam gelugor and one cup of water. I let it cook until the mutton was tender.
There was quite a lot of liquid released after cooking, so I removed the meat and reduced the gravy over the stove. When the gravy was quite thick, I added onion rings and let it simmer for just a little while more. 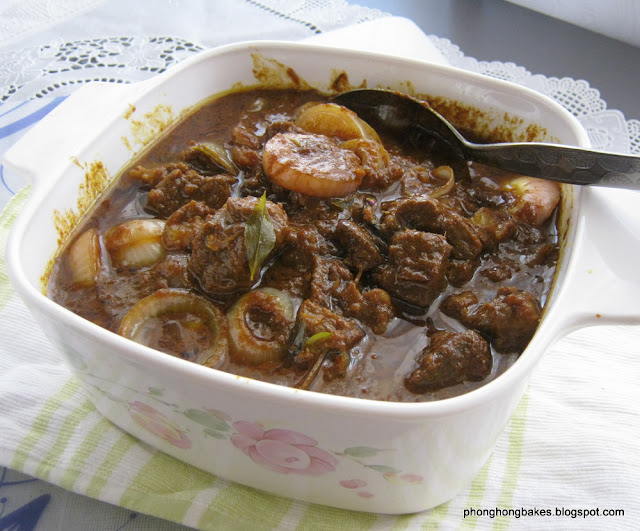 Messy real life food that is served at home.The smell was wonderful and the taste was awesome! I defrosted one portion of my Nasi Tomato to eat with this Kambing Masak Hitam. 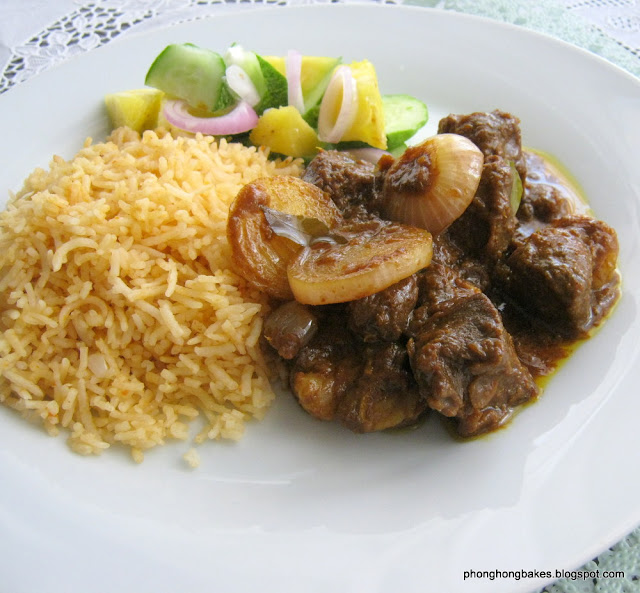 Delicious! I am so glad that I tried this recipe. This being mutton, the gamey smell was quite strong but it is acceptable to mutton lovers like me. This recipe is a keeper and you can tweak it to your own taste. 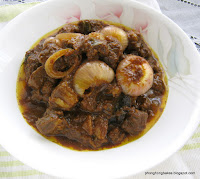 Kambing Masak HitamRecipe source : Guided by Nurilkarim Razha's article in The Star
Ingredients :- 800g mutton cubes- 10 shallots- 1 generous thumb sized ginger- 4 cloves garlic- 1 tsp turmeric powder- 1 heaped tablespoon fennel powder- 1 packet meat curry powder  (25g)- 1/2 cup sweet soya sauce- 2 pieces asam gelugor- 1 cup water- 2 tbsp oil- 2 sprigs curry leaves- 3 onions, cut into rings
Method :1. Pound (or blend) shallots, ginger and garlic into a paste.2. In a mixing bowl, add mutton, the pounded paste and turmeric powder, fennel powder and curry powder. Miz to coat mutton with the spice paste.3. Leave to marinate overnight.4. Put the marinated mutton in a slow cooker (or a pot over the stove) and add sweet soya sauce, asam gelugor, water and oil.5. Braise until mutton is tender and the gravy is reduced.6. Add curry leaves and onions rings and simmer for another 5 minutes.7. Check for seasoning and serve.
Note : I used a slow cooker and noted that 1 cup of water is too much because the meat released some liquids. I separated the meat from the gravy and simmered the gravy over the stove until it reduced to half. 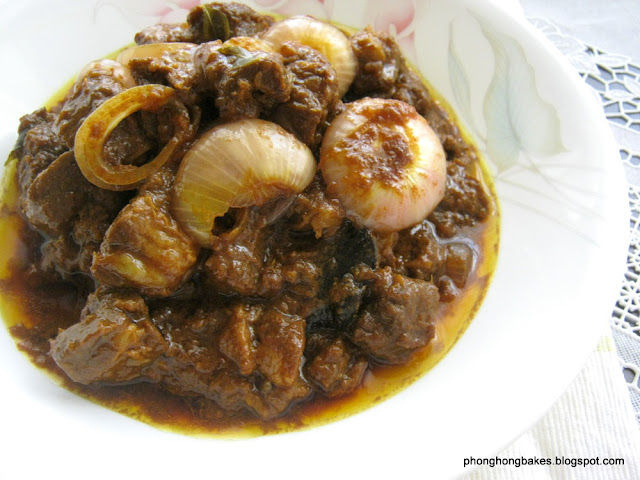