This weekend was one of those weekends where you realize what's important in life: your family, your friends and your oven.
Family: We started the weekend off at the pumpkin patch.  This is me in the barrel train that smelled like cat pee.  But once it got moving it was totally OK.  Plus I was embarrassed to ride in it so I forgot about the cat pee.  Also, my kids were cute because they were happy so there's that.  That's also a picture of my husband and Ansen.  Aren't they cute too?  OK, I'll stop. 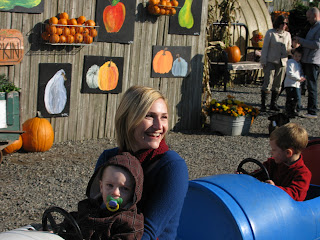 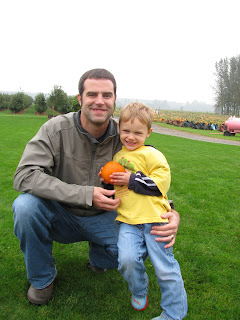 I know, this is ridiculous but I totally couldn't resist. 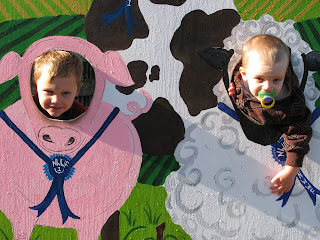 Oven:  I was like, hey oven, what up?  And it was all like, I haven't seen you in a while.  And I was like, yeah, I know it was summer and I was cheating on you with the BBQ but I'm back now so get ready.  First off was the Oktoberfest Chicken from the October recipe posted by Megan and Megan's April potato recipe.  I got a farm fresh chicken from Acme Farms (thank you!) which I'm sure added to the deliciousness.  I followed the chicken recipe exactly.  My favorite part was the beer because once you open a bottle you're allowed to drink it.  Even if it is only 2:00 in the afternoon.  I also loved that it was a really easy recipe that totally made me feel like a domestic goddess. 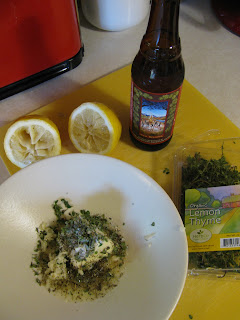 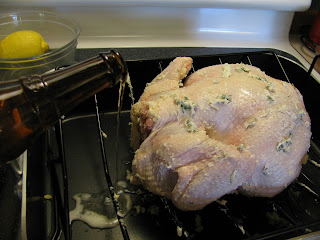 If only I'd had some string it wouldn't have looked all spread eagle.  Oh well. 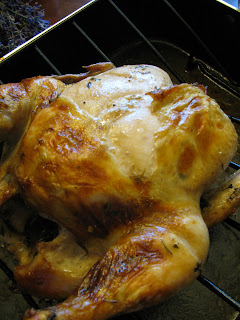 Friends: Our friends Emily and Matt and their children Claire and Wesley came over to help us eat all that chicken.  Both kids are the same ages as our kids and we realized after they'd left that it qualified as Asher's first official play date and we thought that was cute.  Awe.  Also, p.s. this picture is the best the house and kids looked all night.  At one point the toys were so out of control on the floor it looked like primary color vomit.  Also, I don't have a picture of it, but Emily brought dessert and it was the most brilliant thing: chocolate wafers and a variety of single serving ice cream varieties so the kids could make their own ice cream sandwiches.  It was even fun for the adults! 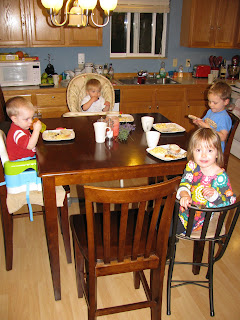 Ansen and Claire got to pull the wishbone.  Ansen said he was going to wish for a cow.  Thank god Claire won.  Ansen was so disappointed he could hardly pull it together.  I wanted to say, yes, but isn't this better than the disappointment of winning and realizing mommy isn't going to buy you a cow?  Maybe 4 is too young for the wishbone. 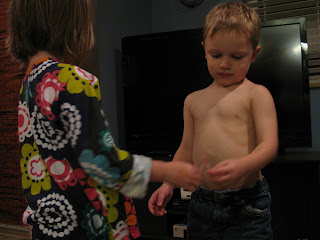 OK, so the next day I used the leftover chicken and pugliesse bread from the night before to make chicken sandwiches, ala day after Thanksgiving.  They were so delicious and super easy. 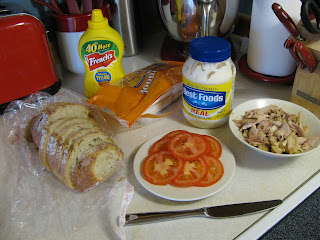 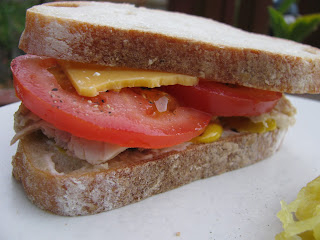 I paired the sandwich with a side of spaghetti squash (thanks again Acme Farms!) and tossed in butter, olive oil, Parmesan cheese and sea salt.  (Bake rim-side down smeared with olive oil and salt at 400 degrees for about 20 min.)  I was the only one who liked it, unfortunately.  It was so good!  This is what I deal with lately with my family.  If it is good for them, takes me longer than 10 minutes to make and costs more than a dollar they're like, totally disgusted.  Both boys put it in their mouths and spit it out immediately (must have been the texture) and Andy said it tasted weird but he'd tolerate it.  I ate it all, basically and then just ate some for lunch today too. 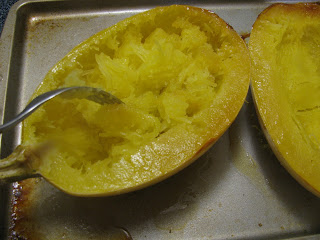 See, doesn't that look so good?  It was good, I tell you! 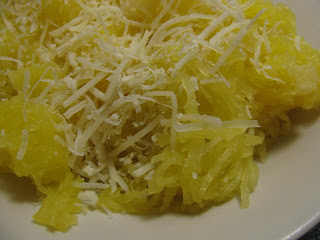 Anyway, after the squash I made apple pie, thanks to the tree next door and our super nice neighbors Steve and Donna.  My oven told me it was tired. So I let it rest after that. 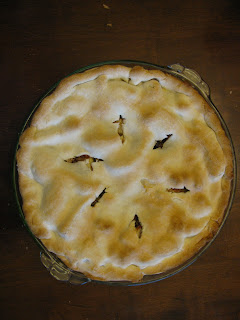 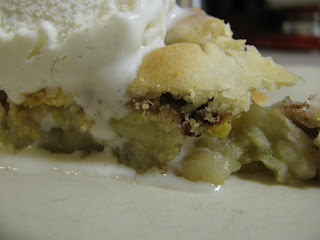 ﻿I'd better start that work out routine again.  This fall is already off to an extremely yummy start.
Signing off, your recently renewed domestic goddess.