Reading In The Time Of A Pandemic


Today is World Book Day, instituted in 1926 and a lovely occasion to reflect on reading and the place of books in one’s own life. Since we are currently living through a global pandemic, which has both limited the options for accessing books and shaped the daily mood, I have decided to reflect on my own reading and my own appetite for reading in these strange circumstances.

One of the key trends I have noted in people’s choice of reading is a desire to be topical. We are living through a pandemic, let us read books that deal with this topic, be it Boccaccio’s The Decameron, Defoe’s Journal of a Plague Year, Camus’ The Plague or any of the multiple other options, such as the ones listed by Keziah Weir in a Vanity Fair article. This is a sentiment I understand. Fiction helps us make sense of the world, and books written in the past concerning circumstances similar to ours provide some sense of consolation: This has happened before, we will live through it. For some this is undoubtedly a good coping mechanism, which is one of the great purposes of literature in general. For others, however, one’s mental well-being might be impacted in a negative way by inviting horrors similar to those of the current world into one’s own mental world of reading. I am, of course, not saying that there is any one correct answer to the question of what one should read and what one should not read in any particular situation, but I for my part have no desire to be topical in my book choices during this pandemic.

When the pandemic began spreading to Scandinavia, my reading was going slowly. I was working my way through several books at a time, something which is very common for me, but which was going abnormally slowly this time around, probably owing to the pressure of an article deadline which directed most of my reading. I had recently finished James Hilton’s Lost Horizon, which is a book I found immensely uplifting and which instilled in me a degree of tranquillity I rarely experience when putting down a book. This was before the situation grew increasingly serious in Scandinavia, and I would perhaps have benefitted more from reading the book during rather than before measures were taken to deal with the spread of the virus. 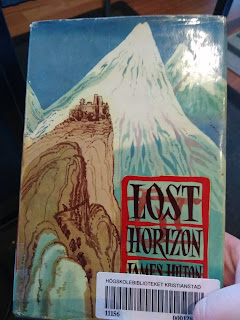 Following on from Lost Horizon, I decided to finally read George Orwell’s 1984. This choice was unrelated to anything happening around me. I had ordered the book because I wanted to be able to use it in teaching. The previous term I had relied on some of the aspects of Orwell’s dystopian vision to teach about the relationship between language and source criticism, and it made me realise that I needed to imbibe the entire book in order to use it more effectively and more extensively in my teaching.

It turned out, unfortunately, that 1984 is disquietingly topical for our current situation. While the book does not deal with a pandemic, its description of a closely monitored, restrictive society have too many similarities with the self-isolation needed to slow the spread of the new corona virus. For my own case, living in a small city in Sweden, the situation did not have that many parallels. Sweden was slow in implementing any significant measures, and aside from reduced activity in the shops and the streets there has been little to remind the casual onlooker that we are indeed living through a pandemic. In Denmark and Norway, however, the situation has been different, and since I have been frustrated with the tepid Swedish response I have been following the guidelines of my homeland instead. Consequently, I have been self-isolating in a small, cramped one-room apartment, which has in some small way evoked certain similarities between my world and the dystopia of Winston Smith. What has made 1984 so dreadfully topical, however, is not the self-isolation in Scandinavia – things are not dire here, at least not for most people. Instead, it is in countries with either a too strong or too weak a response that has highlighted the topicality of 1984: Needlessly severe curfews in Serbia, and, above all, the carelessness and tardiness of the UK and US governments followed by mendacious struggles against reality. A crisis like this pandemic has strongly demonstrated what we already knew: Any leader who undertakes a fight against facts is bound to cause a devastating amount of harm. This is also one of the core lessons of 1984.

I did not choose 1984 because it was topical, because I have no wish to be topical in my reading during a time of crisis. While I soldiered through the novel in order to be done with it, I took refuge in fantasies instead. By the time I went into self-isolation, I had started reading a collection of stories by Salvadorian author Luís Salazar Arrué (1899-1975), whose pen name was Salarrué. The collection, titled O-Yarkandal, tells impossible and mythical stories from the now sunken empire of Dathdali, and they are recounted to an audience called soñadores, dreamers, by the narrator Saga. These stories combine elements of fairy tales, legends and myths with semiotic games and paradoxes reminiscent of the later works of Borges and Calvino. In one country, all writing is committed to the outside of urns and vases and must be read vertically. One story tells of how a false note sung by a bard has the capacity to kill. One story describes an island existing in one’s interior where fears and vices have physical manifestations that can undo one’s being when trying to traverse them. In a beautifully dreamlike language, Salarrué constructs these impossible worlds in the reader’s mind, and these worlds have more in common with humankind’s inner reality than the external one. I immersed myself in this Atlantis-like lost empire, and found it immensely soothing, especially as a contrast to the grating topicality of 1984. 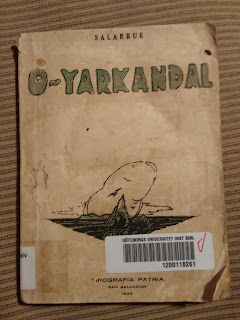 Having finished O-Yarkandal, I was for a brief moment uncertain of what to pick next. I had bagged a small stack of books that had nothing to do with work when I visiting my office one last time before self-isolating, so my options were not extensive. Fortunately, I had been able to pick up from the library one of the volumes of the complete English translation of Shahnameh, the verse history of the Persian kings composed c.1120 by Abolaqsem Ferdowsi, translated by Arthur and Edmond Warner in the early 1900s. This exuberant narration of the heroes of Persian mythological history is an at times gruesome yet wonderfully vivid account of the stories and figures that have shaped Persian self-understanding for more than two millennia (since Ferdowsi recounted legends whose oldest traces go back to the time of the Hellenistic world and even beyond). This is the book I’m currently reading, to continue the lack of topicality. It is a hefty tome – and it is only the second out of nine volumes of the translation – so I also intersperse this reading with other things, but as the main reading of the pandemic, it serves me very well.

Topicality has its virtues, of course, and keeping up to speed with the world of which we are a part is important. But the ways and means might vary, and while reality is lying heavily around us as an impenetrable fog that shows no signs of lifting in the near future, any reading that invites the fog into the house is something I wish to avoid.