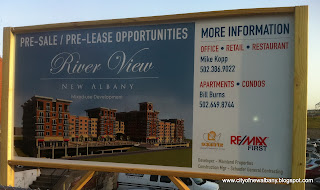 This one speaks for itself. Take it away, Daniel.

NEW ALBANY — Other developers will have an opportunity to purchase the land that had been planned for the $43 million River View project after the New Albany Redevelopment Commission voted Tuesday to rescind an option extension for Mainland Properties.

The commission asked the administration to prepare a new request-for-proposals, or RFP, document and present it to the body next month for review. Commission member Adam Dickey, who was not present when the latest extension was approved by the body in May, said the project is going into its third year without much progress since gaining the option from the city.

“I’m not convinced that we’re moving ahead to the degree that we should be,” he said.