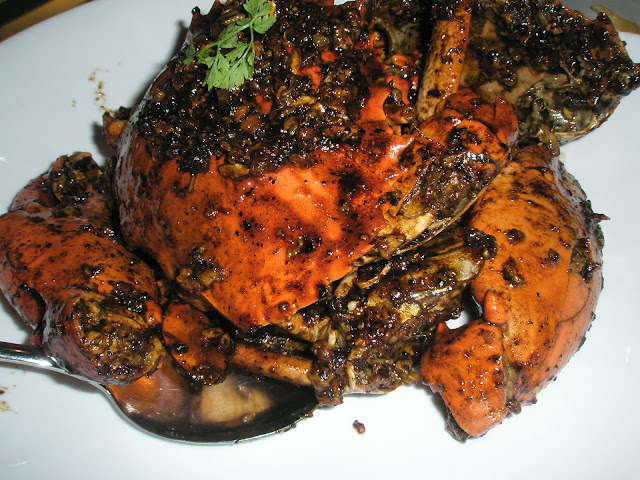 Singapore.... just WOW.
I didn't expect too much, many people told me that Singapore was just a big shopping mall.  Since some of those who know me, know that I had more years than I care to admit in a retail environment, shopping is not one of my favorite things to do.I realize I didn't buy anything in Singapore. Nothing, nada, zilch.   And I'm good with that.But,More people should have mentioned the food to me.  Don't they know me?  The food was amazing.. I didn't have one bad meal there.Okay, there may have been one lousy soup, but that is all. Maybe I will talk about  it later... 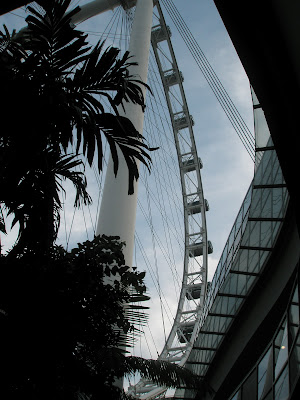 The Singapore Flyer
I am not usually the biggest ferris wheel fan, but this was a very fun thing to do, and not scary at all. About 8 of us had a capsule to ourselves. Each can carry up to 28 people, and you can even schedule one for a special function, like a champagne dinner.. It takes about 30 minutes to go all the way around and the views are pretty darn spectacular!

The Black Pepper Crab (pictured above) was served at a really nice seafood restaurant below the Singapore Flyer, with views of the harbor, the stunning Sands resort and the Singapore Gardens by the Bay.About twelve of us sat down to dinner at a huge  at a huge round table with a big lazy susan.
The food just kept coming. So many interesting dishes; deep fried baby squids, soup with a whole fish, geoduck done in a spicy sauce, crab prepared two different ways and more. When I served a huge crab claw in black pepper sauce, I was looking at how to crack it in a lady-like fashion at this business dinner,  I was sitting next to the host, who reached over, put the claw on the tablecloth between our plates and smacked it with a mallet about ten times. I was shrieking the whole time, for a multitude of reasons, mainly concerned about my shirt and the flying black sauce,  crab bits and having to pack it in my luggage for the next week. The tablecloth took the brunt of the impact and mess, and thankfully my shirt remained unscathed. I was a bit mortified to be sitting at the messiest place at the table though. 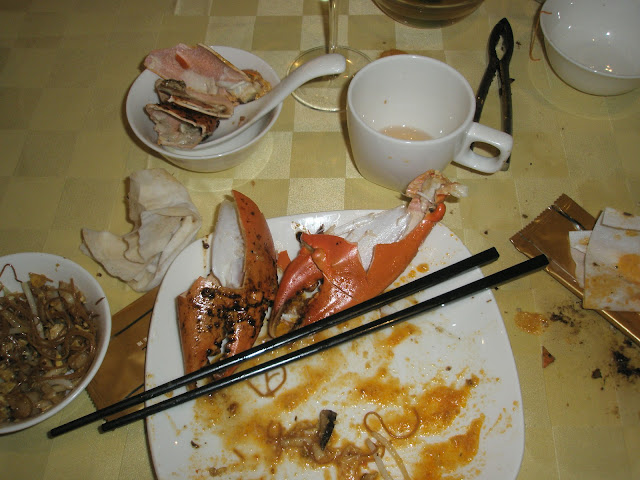 The soup was served in a bowl big enough for a baby bathtub and included two whole fish. It was a spotted fish with an unhappy face... and eyes. I could tell, because it was still attached and in the soup.  They took the bowl away to serve it, and brought the heads back to the table on a platter, in case we wanted to nibble on them.  We'd been to lunch the previous day with this same group, so we knew that the heads were considered a deliciacy as we had watched one of the local guys pick the head clean.  This time, a coworker and I gave each other a look, a dare, perhaps.  I decided I would try the cheek... because everyone knows halibut cheeks are the best part, right?  So I went for it, it was good, fine, nothing to be afraid of.  My co-worker said he was going for the eyeball, after getting egged on by the local beside him.  I have pictures of that whole endeavor, but I figured he didn't want to be famous in my blog for eating an eyeball.

We had these two days in a row, some sort of sticky sweet and spicy prawns.  The heads were still attached, so I ate that too. It was delicious. 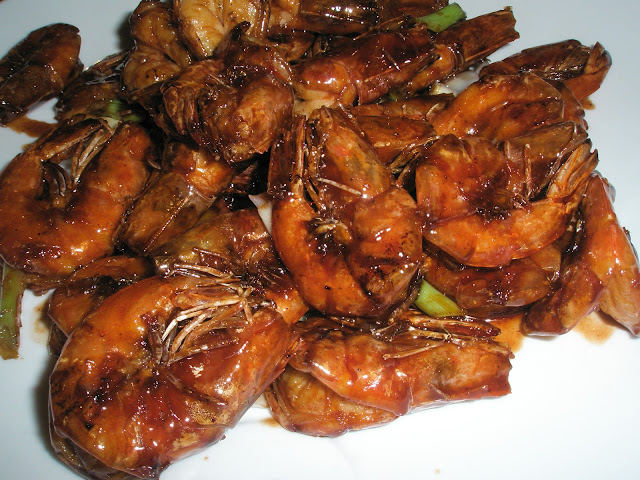 Below is the baby fried squid in a sweet sticky sauce, sliced duck, whole fried fish (the yellow things) and I have no idea what the round things on the cucumber was. Tasty though... 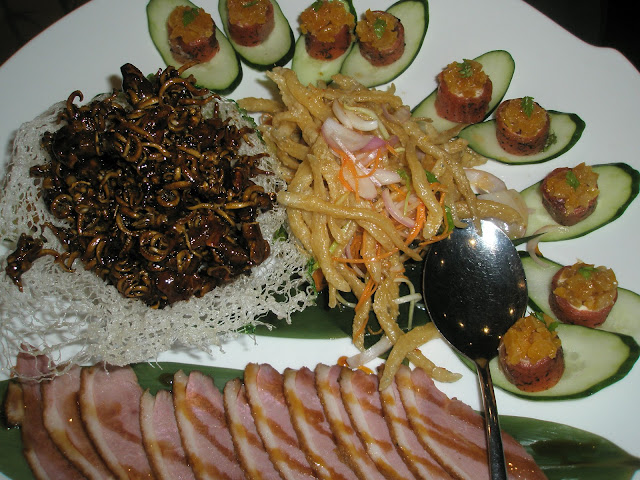 I wish I had pictures of the famous Singapore Chili Crab, but by the time that dish came my hands were a sticky mess and frankly, I was in the eating zone.  I think I may have called the sauce "the best stuff on earth" or something like that.  It came with this amazing bread that you dipped in the sauce.  The bread was almost like fry bread, sweet, dense, crispy fried ready to dunk in a chili creamy sauce with crab. I would eat that dish again.... any time, any time.

This isn't my picture, but it looks like our dish did that night. I wish I had a photo of the bread... 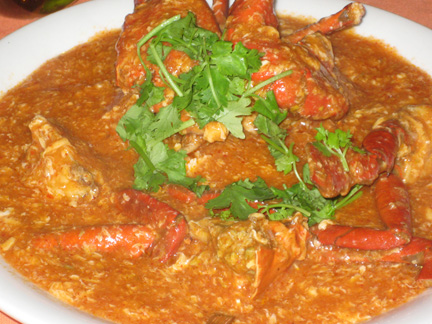 Here's a couple more images of Singapore that day. 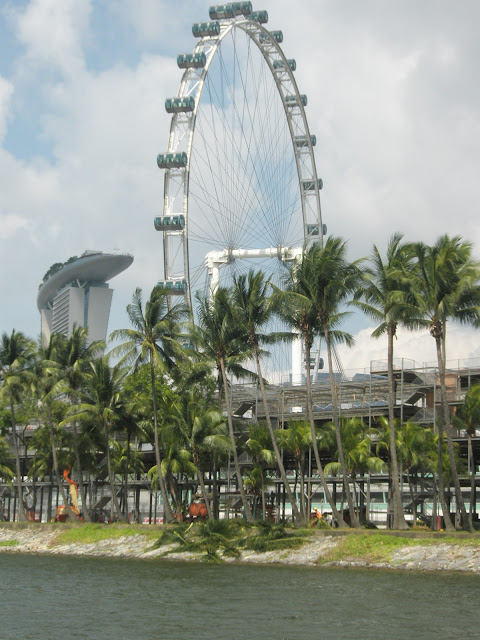 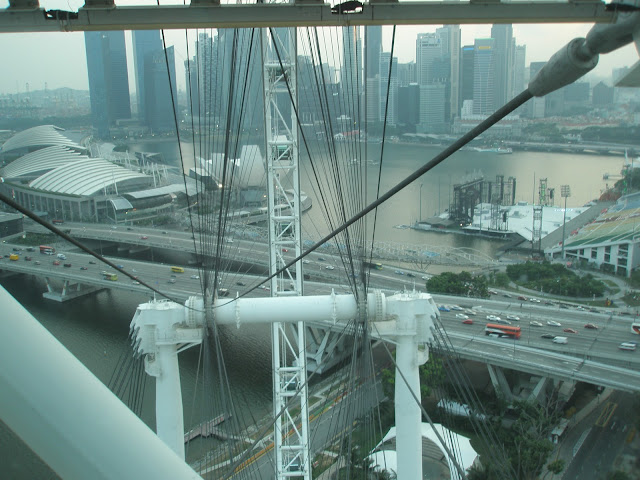 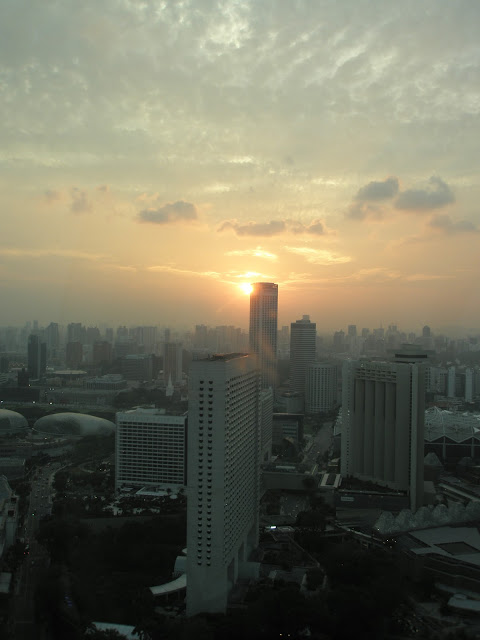 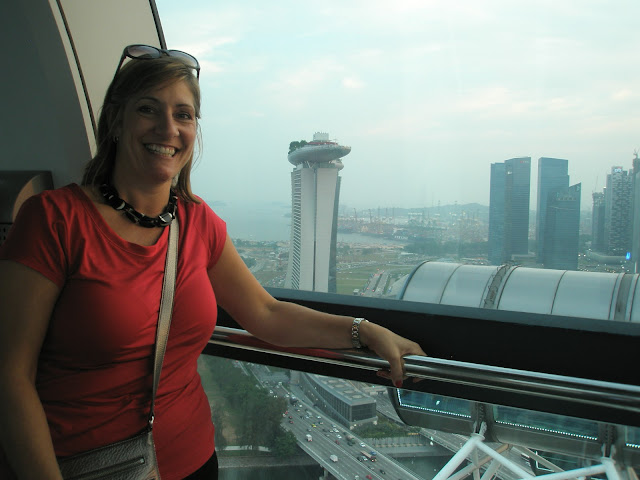