Last August I spent some days in York and most of the time I either spent in company with good friends or roaming about the city in search of history. One of my many favourite places in York is the Church of the Holy Trinity in Goodramgate and when I had tired of the tourist-thronged streets I sometimes retired to the churchyard to have some time alone. Unfortunately, due to the tourist season, I was never truly alone as people would walk in and out of the church while talking loudly, or sitting down to eat lunch. I have a hard time appreciating crowds - even when small - and I couldn't help becoming increasingly annoyed at their very touristy behaviour. Surely, some of this annoyance stemmed from my prejudice of tourists and my irritation may have been unwarranted to some extent. It did, however, result in this little poem, written mostly in situ, which I'd like to share. The italicised text in the opening line is an actual quote from one of the female tourists. 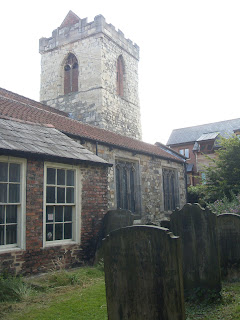 The Goodramgate Church
She said: It looks, like, so old in there,her American twang and blonde haircapering to prejudice. She seemed amazedby the sheer antiquity of that place.
Others, less reverent, but calmtend to their vacant stomachs. Their balmis not of mind or spirit but the maw.I half expect them to leave with a brisk caw.
Some are plain tourists come to glance and glare,not like a huntsman entering a beast's lairbut casual, like whatever, going in and outin swift succession, pondering neither faith, the place, nor doubt.
And I having sought in vain my solitudeobserve from a distance the bale brood,falling prey to loathing and the dark distastethe scholar has for gawpers and the world's haste.- August 12 2012