The Ludic Vision Of America - Or, Adventures In Medievalism, Part 2

About a month ago, I participated in an online conference on medievalism in twenty-first-century audiovisual media, which gave me an opportunity to delve into how modern culture has engaged with the historical contact between Norse seafarers and Indigenous people in what is modern-day Canada. The subject is immensely rich, as there have been comics, cartoons, films, TV-series and computer games that have dealt with this subject in various ways. Due to the richness of this material, my presentation on the subject served mainly as an inroad that opened up a wealth of questions and sources, and I will use this blog from time to time as a vehicle for thinking about and grappling with the material. The present blogpost is, therefore, the second instalment in a series called “Adventures in medievalism” (the first instalment can be found here).

At the aforementioned conference, “Medievalisms on the screen”, I argued, among other things, that due to the cultural engagements with the topos of Norse contact with pre-Columbian America, the Norse have become part of the modern American vision of history. To put it in a different way, the Norse have become a staple of how Americans – and indeed many non-Americans – imagine and encounter American history. It is of little consequence that the Norse impact on the geography we now call America appears to have been rather limited (albeit more extensive than previously thought). What matters is that through the Norse landfalls at various points on the American landmass, there has been established a historical link between what has been thought of as the old world and the new. This means that to modern-day Americans of European heritage, the Norse contact has provided them with a kind of pre-history of USA and Canada that includes a European, and a Northern European, white, element. The details of this fascination are better fleshed out by E. R. Truitt in a 2016 article.

Because the Norse element in the history of the American landmass has been blown out of proportions in cultural expressions dealing with American history, the Norse – or rather, the Vikings – have become a topos of the historical understanding of America. Such topoi are important marks of how non-experts in history receive, understand and misunderstand the past of a given area or a given culture. In the case of America, and particularly in the case of the US, there are several such topoi that have become so deeply-rooted in the modern cultural imagination that they become part of what I call the ludic vision of America. It is this concept I will try to flesh out in somewhat greater detail in the present blogpost. 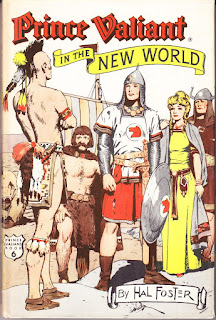 Prince Valiant in the New World by Hal Foster
Collected comic strips from 1956
Courtesy of abebooks.com

By the term “ludic vision”, I mean the kind of vision of something – or someone, or somewhere – that is conjured up or that informs a playful, ludic, engagement with it. In terms of American history, there is a ludic vision of this which is shared by people within and without the US, and this vision is comprised of specific terrains, specific types of people or characters, and specific events. For instance, Western films, books and comics, and lately also games, employ landscapes and topoi that simply and easily invoke the historical period that is being enacted, or, rather, that is being ludically re-imagined. Such Western topoican include cowboys, bounty hunters, trappers, Native Americans, American soldiers, and also landscapes like canyons, deserts, prairies, etc. These combine to make a ludic vision of America, and due to modern culture’s fascination with American history, this ludic vision comprised of the aforementioned topoi are disseminated widely, and consequently also shared, and developed further, by creators and consumers of culture from many different backgrounds. Moreover, because these topoi are so widely shared, there is also a more widely unified ludic vision of America, which means that fewer individual topoi are needed to invoke the full-scale vision. One Native American warrior, for instance, is sufficient to invoke the totality of post-Columbian American history because modern culture has made the Native American warrior a topos, or perhaps rather an avatar or an emblem, of that part of American history. (Similarly, of course, the Native American warrior represents the pre-Columbian history, but this period has gained less traction in modern culture, despite the fascination with the historical contact between the Norse and the Indigenous, and it is therefore likely that a Native American warrior is employed to signify the post-Columbian era in modern cultural expression.)

While the various topoi of the Western genre of cultural expressions comprise the perhaps most significant aspect of our contemporary ludic vision of American history, there are also others such topoi. For instance, the typical pirate employed in modern culture is, in terms of geography, an American pirate, set in the Caribbean and operating within a wider American geographical remit. This is so despite the fact that piracy has been a part of maritime history all across the inhabited globe, and it is a consequence of the widespread dissemination and popularity of the cultural imagination centred on the American pirates. Other such topoi are, for instance, conquistadors and, thanks to Arthur Conan Doyle, dinosaurs.

Similarly, the Norse, or the Vikings, have also become part of the ludic vision of America. One of the perhaps most influential examples of this is Hal Foster’s comic strip Prince Valiant. The topos of Vikings in America has also been picked up by comic book creators from the US (such as Donald Duck stories by Carl Barks and Don Rosa), Spain (Capitán Trueno by Victor Mora), and Belgium (Jean van Hamme). In addition, this topos is also employed in films (such as Pathfinder), TV series (Vikings), and computer games (such as Age of Empiresand Dead in Vinland). In other words, Vikings have become a very important part of how we playfully imagine America. 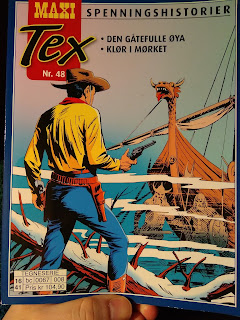 Cover from "Ombre del passato" from 1981 by G. L. Bonelli and Guglielmo LetteriAdapted for a collected volume in Norwegian translation, Egmont, 2016

One important aspect of the ludic vision of America is the employment of achronology. This is a topic to which I aim to return in later blogpost, but the main point of is that by removing chronological boundaries and merging all historical periods into an atemporal here-and-now, topoi from across the chronological spectrum can be brought into play. Achronology can be employed in various ways, and very often it takes the form of relict societies – peoples who have continued their lives in the form of a particular historical period all the way to the present day. In some cases, this is how Vikings are introduced into a particular enactment of the ludic vision of America. In the Tex Willer story “Shadows from the past” by G. L. Bonetti and Guglielmo Letteri from 1981, for instance, the protagonists encounter a Viking society on a forbidding and secluded island on the north-western coast of Hudson Bay. Here we see an example of how Italian comic book creators also share in the same ludic vision of America as seen in the cases from the US, Spain and Belgium mentioned above.

Another example of how the trope of relict societies facilitate the employment of Vikings is the original DuckTales series. In episode 61 of season 1, “Maid of the myth”, a gang of Vikings raid Duckburg and return to a secluded island somewhere in the Arctic – an island surrounded by solid ice but warmed by hot springs that allow for the growing of palm trees. Here, too, we see that the Vikings are part of a ludic vision of America – and that they are even turned into Americans, as two of these Vikings become fond of root beer in the course of the Viking raid. 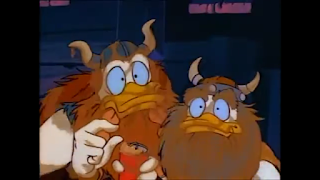 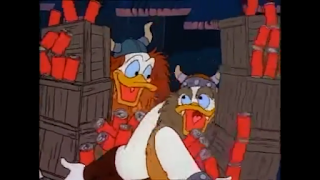 The ludic vision of America is complex, and can be further divided into several categories. Moreover, while the general ludic vision is shared by people from many different backgrounds – as exemplified above – the ways in which the ludic vision is enacted can vary significantly, and the ludic vision is of course also constantly developing. But despite changes and variations, it is important, I believe, to recognise that there is such a shared vision of America and American history that furnishes, facilitates and influences how we engage with American history in modern culture. The reason why this is important is that modern culture influences our understanding, or, perhaps more often, our misunderstanding. In order to understand how we understand or misunderstand, we must know how this ludic vision functions, and which elements it is comprised of. In this blogpost, I have tried to sketch the general outlines and pinpoint some of its characteristic, defining features, but I will need to develop the idea further.