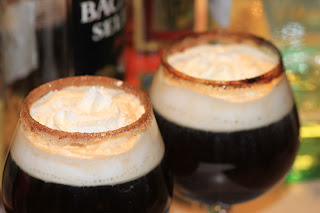 Yes it’s officially spring, but it’s still F-f-f-f-f-freezing cold here in the Pacific Northwest. The only benefit of shivering day and night when it’s supposed to be warm and spring-like out, is that it’s a good excuse to drink a hot cocktail. We’ve got to keep ourselves warm one way or another, right?
No this cocktail doesn’t have April's secret ingredient: ricotta in it (but hey, that’s a good idea / challenge for someone) but it’s really fun because it calls for a food torch! My awesome mother in law gave me a torch for my birthday and since then we’ve had a blast with it and it's a hit when dinner guests get to torch their own cocktail, creme brulee, etc.! It’s not necessary for making this cocktail, just an added bonus.
Curtis loves ordering Spanish coffees in restaurants, especially in Mexico because they make a big production of making them. They usually bring out a bunch of waiters and it's a show of lighting all the liquor on fire and pouring it from pitcher to pitcher into your coffee glass. Then it's topped with either whip cream or ice cream. 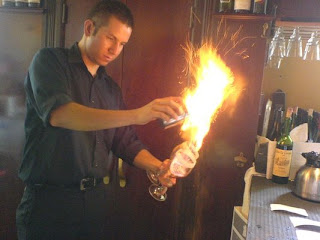 BAM! This guy is going to get a big tip tonight!
Curtis and I set out to figure out the perfect Spanish Coffee recipe! This recipe may not have quite the dramatic presentation you'd get in a restaurant, but it sure is delicious, and you won't burn your house down in the process. Salud!
Spanish Coffee Recipe
Ingredients:1 oz. Tuaca3/4 oz. Kahlua1/4 oz. Tia Maria (or any coffee flavored liquor)1/2 oz. Rum (150 proof if you want to be able to light it on fire)Fresh, brewed coffeeWhipped CreamLime wedges
Special equipment: Food Torch
Rimmer:1/2 cup Sugar1 tablespoon CinnamonNutmeg, just a pinch
Rim a glass with lime juice and dip in the rimmer. Add all liquor and coffee to the glass. Torch the rim until it melts (it will taste like candy!). Top the coffee with whip cream and sprinkles (if you want extra flair). 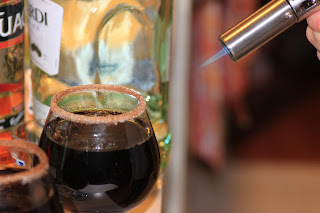 Who doesn't love playing with fire? 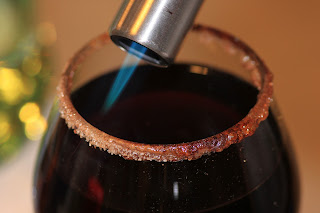 I've been caught licking the candied rim off my glass! 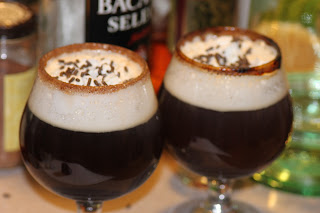 Voila! Dessert and a cocktail all in one!