One of my mother's uncles was known, at least in the family, for saying that he travelled on the map. He was a knowledgeable man who spent very little time outside his native Norway, yet who knew more about the world than most of his neighbours by virtue of having perused maps and atlases. The more common expression, of course, is armchair travel, but I usually tend to prefer the former expression, perhaps because it sounds more grandiose, or perhaps because its conceit imitates more closely the act of travelling.

Even though I have travelled a bit, I have covered the greatest distances by pages, either in atlases or in texts, and I have loved this kind of travel ever since I learned to read. I have, however, noticed that now my opportunities for travel are very restricted and I am unlikely to go far this side of summer, at the very least, I seem to have gravitated towards travelogues of different kinds since the beginning of December. This appetite for vicarious travel has resulted in the following little selection, which includes historical sources, a monograph about a historical source, and a novel. What I find particularly fitting about this selection is that the historical travelogues - namely the accounts of Ibn Fadlan, Benjamin of Tudela and Odoric of Pordenone - were from their very beginning aimed at providing readers who themselves had not and probably could not travel these routs themselves a way to get a sense of the marvels and the sights in far-away places. That these books continue to serve this purpose about a millennium later is a testament to, among other things, the enduring pleasure we take, as human beings, in travelling by all means possible, be it by ship, by horseback, by airplane, or by page. While I have a different view of the world that the first readers of these historical accounts, as well as their authors, I feel an unmistakable kinship with those who moved through these lines and pages in order to live or relive journeys to distant and exciting places. It is clear to me that some things do not change, even in the course of a thousand years. 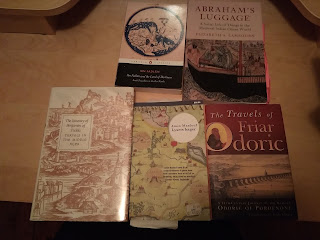