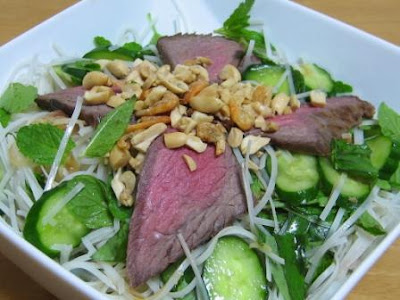 It was unseasonably hot the other day (27 C in early May!), but luckily I had already planned on making this yummy sounding salad recipe that I nicked from Melbourne's The Age newspaper a while back (when the weather was warmer in the southern hemisphere than it is now). It doesn't seem to be available on the Age web site any more, but you can get it, with a spiffy photo, at Cuisine.

I used the remains of a packet of Thai rice noodles instead of the mung-bean thread (glass or cellophane) noodles, soaked in hot water out of the tap. Having done some further sleuthing, I reckon I'd soak them in fresh-boiled water next time (or use the correct noodles as instructed (g)). They were a little on the crunchy side (g).

I also cooked my block of good Aussie beef (being preferable to the US stuff with Japanese consumers for the last few years due to ongoing BSE problems in the US) in the oven, as you'd never get it under our tiny grill, which is intended for fish, after all. If you do it this way, you'd want to preheat your oven to 200 C and sear the beef on all sides in an ovenproof frying pan, then bung it in the oven for around 10 minutes. Leave it to rest before carving. I thought the beef (which wasn't a fillet) was a little tough, so I might add a bit of vinegar to the hoi sin sauce marinade next time and see what happens.

Looking at the photos, I realize I inadvertently topped my version with dried Thai shrimp instead of the fried shallots. In Yokohama, both can be found at this shop.

I also didn't add the coriander, as the Young Man basically won't eat anything with it in.

Now, this was my first foray into Southeast Asian salads, and I can't believe how easy it was. The tastes are big and bold, and there's lots of different things going on texture-wise, too. This is a definite keeper, and was a nice intro into an area covered in more depth by this book, which was my last cookbook purchase from the bookshop downstairs at work before the office moved to down-town Tokyo (where downstairs is home only to swanky (read "overpriced") eateries and NO bookshops with extensive cookbook offerings (how will I survive?!). You'll be hearing more on Blue Ginger shortly, I imagine (g).

Method
Marinate the beef in the hoi sin for 2 hours. Soak the noodles in hot water until soft. Drain, rinse in cold water and cut into manageable lengths (about 10cm) [S: kitchen scissors make short work of this]. Combine the herbs, cucumber, chilli and noodles in a bowl. Combine the dressing ingredients and adjust to taste. It should taste sweet, salty and tangy all at once.

Grill the beef to medium rare and allow to rest for 5 minutes. Slice thinly and add to the salad. Toss everything together and serve on plates sprinkled with the roasted peanuts and fried shallots.