Weekly Review: What The Others Say? (urbanism) And The Architect Of The Day: Andrew Simpson

Which is Denser: New York or Los Angeles? was the question that Sustainable Cities Collective posed on September 7th (2011). Let's deplace the question to an Asian city such as Tokyo. I am always astonished to see how dense is Tokyo where I live now (for several weeks), Tokyo and its 23 wards (8,967,665), Tokyo Metropolitan Area (13,185,502), Tokyo Metro (34,607,069) all organized by and around railways.
I am surprised to see how Setagaya has changed after decades of domination of appartments which destroyed the smallest green zone that Setagaya used to have. Now that sustainability is on our agenda, Setagaya ward, with real efforts, attempts to reach, at least, at 33% of green areas inviting residents to plant trees and other flowers. Chris Berthelsen (A Small Lab), a researcher on urbanism, urban gardening who is currently based in Tokyo, recently reported on This Big City some tactical investigations (if the term of tactical is appropriate in this case) in Tokyo. According to Berthelsen (and he is right), Tokyo is made of unimposed order, consisting of communal self-determination on one hand and individual freedom on the other. It's amazing but both contradictions are then interlinked to form this metropole. Chris Berthelsen interestingly drew a list of Tokyo's small places of 'anarchy': Tokyo DIY Gardening, FIXing the Neighbourhood, Collaborative Mental Mapping.
Yet this leads to a question: Should we call these acts "Right to the city" in a-Henri-Lefebvre-way (or a-David-Harvey-way)? Well this question is difficult, quite complex and I am not sure that, even though Tokyoite are strongly involved in building a more livable city — an example among many others: residents clean themselves their streets —, so despite these individual acts, these cannot be called "right to the city" which has a too strong political connotation. Anyway, as we can see, this question of human-scaled acts (or tactical interventions) recently appear to boom and Mimi Zeiger (Loud Paper) listed some interesting urban interventions which aim is to ameliorate livability of the built environment — here in Tokyo (as Chris Berthelsen reported) and, of course, in cities more generally.
But much, very much more efforts should be done if we want to live in a livable environment as Tia Kansara said which supposed to design balanced cities, say, cities that prioritise people and support nature. This is confirmed by Melissa Sterry who calls to take cues in nature if we want cities to be adaptive to environment (and do with climate change, natural disasters, pollution, etc.) since, according to the same Melissa Sterry, today's cities remain in a state of static inertia, regadless of any environmental changes taking place.
We urgently need to rethink what a city is in the 21th century. New challenges, new ways of designing cities, new ways of living in the cities, new users' demands, but also new risks, and new dangers, as well. A city of opportunity, as Rem Koolhaas recently said? This question is very complex and will remain open for a long moment. So what if we work together to construct better cities?

To conclude, the project of the week is certainly Andrew Simpson Architects' Cloud no 9. 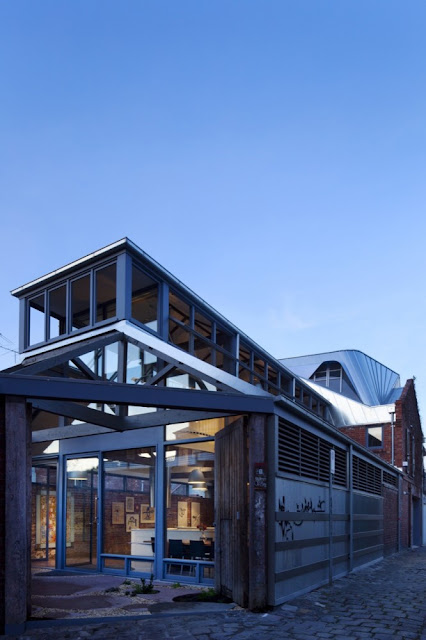 Cloud no9 © Andrew Simpson Architects. Photography credit: Christine Francis
Originally appeared on archdaily
Implanted in the inner city suburb of Fitzroy, this triple brick building consists of a double height warehouse space with timber trusses and clerestory windows, adjacent to a two-storey hay loft. Andrew Simpson Architects' challenge was to convert the building, a historic 1830's building, to a sustainable single family residence while preserving the identity of this existing building. A very simple and elegant house. (Source: Archdaily)

The architect of the day is of course: Andrew Simpson who is trained as an architect and interior designer and integrates both disciplines in over 20 years in practice. Andrew Simpson was educated at Harvard, Melbourne, RMIT, and Manchester Universities. He is the recipient of the Ideas National Emerging Designer Award, the Harvard University Kevin V. Kieran Prize and Edward and Melbourne University Penelope Bilson Award, graduating dux of the master and degree programs from these respective universities. He was a Diploma Unit Master at London's Architecture Association, and also taught design at Harvard, Melbourne RMIT. He has worked as a publication consultant to the Office Victorian Government Architect. In 2005 he was engaged by Monash University to coordinate a feasibility study into the development of courses in architecture and the built environment disciplines and subsequently held a position there as Senior Lecturer in Architecture until 2010. Partners are Michael Barraclough and Melanie Buettikofer.